Let’s face it, 2017 began on a sour note. The year before, many beloved artists and public figures passed away, leaving a depressing list that seemed to go on and on: David Bowie, Carrie Fisher, Gene Wilder and George Michael, to name but a few. Their absence was felt deeply simply because they made the world a better place.

As we look to the New Year, Statehood Media has compiled a list of notable Oregonians that we wish we could have back in 2018. These people positively influenced society through their actions and with their presence, making Oregon a better place along the way. With all the negativity in the world, it’s a great time to honor people who did good things. 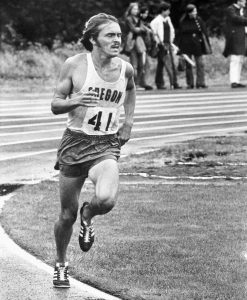 Of all the storied names on this list, Steve Prefontaine is someone who was truly gone too soon. A native of Coos Bay, the long-distance runner’s immense success both at the University of Oregon and across the country catapulted him into the spotlight, where he became a beloved symbol of running culture. Following his tragic, fatal car accident near Hendricks Park, a memorial at Heyward Field in Eugene drew thousands of mourners. His life is memorialized by an annual track meet, the Prefontaine Classic, as well as by the plaque at Pre’s Rock, but most importantly, he lives on in the hearts and minds of all Oregonians.

Oregon’s identity is imbued with hops and brews. Portland’s beer drinking lineage can be traced all the way back to Henry Weinhard, an immigrant from the Württemberg region of what is now Germany, and namesake of the popular soft drink brand that survives today. In 1862, he moved his family to the city and through his shrewd business savvy, purchased several breweries and expanded his own operations, building a reputation for ethical practices and internationally renowned lager. His contributions to the community included founding the Portland German Aid Society, helping to prevent railroad companies from bypassing Portland and famously offering to hook the Skidmore Fountain up to a tank of beer for its dedication. Although that last kindness never came to fruition, we raise a cold one to you, Mr. Weinhard, for your efforts.

On April 1, 1908, Lola Greene Baldwin became the first female police officer in the United States. Her career at the Portland Police Department was marked by the creation of the woman’s protection division, and beyond that, she was a tireless advocate of women, child welfare and justice in the penal system. Her passion still rings true and deserves a salute.

Sadly, as a politician who actually cared about the environment, Tom McCall represents a dying breed. During his years as a journalist at KGW TV station, McCall produced a documentary about pollution in Oregon, which ultimately spurred the cleanup of the Willamette River and the state’s overall air quality. As governor, he continued to champion these efforts, enacting the groundbreaking Oregon Bottle Bill, which has drastically limited the effects of littering since its introduction. He also reinforced a law that safeguards the coastline, protecting the scenery and beach access for generations to come.

In 1913, Fern Hobbs graduated from law school at Willamette University and was hired by Governor Oswald West as his private secretary. Her salary was $3,000, reportedly making her the highest paid woman to hold a public office in the nation. This wasn’t the last time she would make the national news. The next year was marked by outrageous debauchery in Copperfield, a mining outpost in Baker County. Hobbs was sent to the city hall at the head of a National Guard squadron, where she declared Marshall law, eventually quelling the unruliness and returning the city to lawfulness. As impressive as those feats are, her career was marked by even more acts of societal beneficence, including the operation of a YMCA facility and volunteerism with the Red Cross during World War I. She remains a symbol of gender pay equality to this day.

Born in Accra, the capital city of Ghana, Obo Addy led an illustrious life as a traditional African folk drummer and dancer, highlighted by a performance at the 1972 Munich Summer Olympics. In 1978, he settled in Portland and began teaching his skills at Lewis & Clark College. As one of the first musicians to blend traditional folk music with Western pop, Addy was a bridge between cultures, and in 1996, he was awarded a National Heritage Fellowship from the National Endowment for the Arts. He also led weekly drumming workshops at Lincoln High School and his rhythmic mastery is undoubtedly missed.

Damon Knight was born in Baker City, Oregon and following a childhood steeped in science fiction fandom, he went on to become a very successful writer who specialized in short stories. His magnum opus, “To Serve Man”, where seemingly altruistic aliens visit Earth, only to expose their cookbook meant for humans, was later adapted into an iconic episode of the Twilight Zone. Knight went on to found various organizations that support and educate burgeoning authors, including the Science Fiction and Fantasy Writers of America. His ability to enrich imaginations is an ideal that will forever be meaningful.