Long before they were coupled as the classic boilermaker (whiskey with a beer back), beer and whiskey shared the most humble beginnings—sugar-rich grains steeped in hot water. This “wash” provides the building blocks to both of these quintessential American drinks.

In the same way malt lays the foundation for beer, so it goes for whiskey. Some craft distillers are adding ale yeast to ferment their whiskey wash, enjoying the subtle fruity and floral nuances imparted on their final product. The same base can be used by brewers, though they add hops to the wash (known in the beer world as “wort”) before fermenting it.

Distiller Andrew Tice of Portland’s House Spirits has its own type of chemistry with Breakside Brewery in Milwaukie. The two entities have paired to produce a high quality “distiller’s beer” base. “Breakside … produces an un- hopped beer for us consisting of 100% Northwest pale malted barley,” says Tice. House Spirits then ferments the beer with an ale yeast, double-distilling each batch and aging it for two years in new charred 53-gallon American oak barrels. The resulting whiskey, he explains, has a flavorful malted grain character, as well as characteristics (fruit, malt and caramel) that beer drinkers might recognize.

Aside from sharing similar flavor profiles and essences, brewers and distillers are also meeting in the brave world of barrel-aged beer. Barrel aging is what makes whiskey more than just distilled beer. The use of aged whiskey barrels to give spirited flavors to finished beer is logical and is now bridging the two markets, says Alan Dietrich of Bendistillery in Bend. 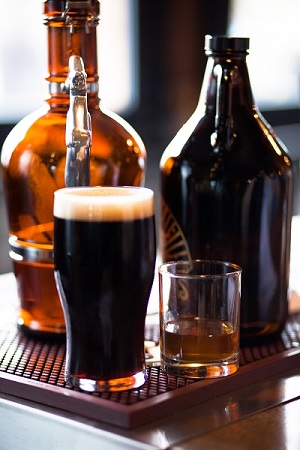 Just as Oregon’s winemakers paved the way for craft brewers three decades ago, craft distillers are enjoying the inroads made by craft brewers over the last ten years. Tice acknowledges the benefits of educated craft beer consumers, and is optimistic about the symbiotic growth of the market. “I think craft beer drinkers will make up the bulk of craft whiskey consumers in the future,” he says. “In the other direction, I think craft distillers are inspiring ideas for craft brewers—it’s broadened horizons to the flavor possibilities.”

Dedicated festivals such as the Big Woody in Portland and Little Woody in Bend are doing their part to bring barrel-aged beer and local, small batch whiskey even closer to the mainstream. Barrel-aged beers such as Deschutes’ The Abyss, Oakshire’s Hellshire I/II/III, and the Breakside Brewery Cellar Reserve series are all pushing the boundaries of beer and spirits. The line distinguishing one flavor profile from another is blurred and creativity rules.

Rich, elegant tones of bourbon in a velvety stout taste decadent, but what if you like your beer and whiskey is traditional Boilermaker style? “Conventional wisdom is to pair the whiskey to the beer,” says Dietrich. “Think of the beer as the food in the pairing.” Create balanced pairings by partnering mellow, malt-forward beers with sophisticated and traditional whiskeys.

For more adventuresome pairings, select peaty whiskey as a foil to heavily hopped beer. Another option is to pair complementary flavors such as pepper-infused whiskey with chocolate stout. Look for similar flavors to pair as well, such as vanilla tones in bourbon with cream ale, or scotch whiskey with a smoked beer. 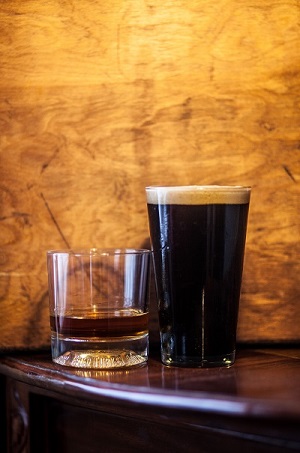