In 1915, the Liberty Bell came to Oregon as part of a patriotism-raising event in the lead up to WWI. Oregonians swooned.

The 1915 annual Umatilla Reservation Indian Festival was in full swing on July 12 when it was upstaged by a remarkable sight. Arriving on a specially designed train, the nation’s Liberty Bell, on tour from Philadelphia, chugged into the Cayuse depot.

Indians in full regalia, Chinese in native dress, and hundreds of others gaped at the Liberty Bell. Liberty Bell officials and the train crew gaped back. The bell’s official photographers took photos and recorded film.

“It is doubtful whether the red people were half as interested in the bell as the Philadelphians were in them,” The Daily East Oregonian reported.

As the Liberty Bell Special made its 10,000-mile journey across the United States that summer, stopping at 275 cities, towns and hamlets, a quarter of all Americans came to see it. The nation’s population had just hit 100 million, half of all families lived on farms, people outnumbered cars by fifty to one, and 30 percent of households had no phone. Thirteen percent of the people in the United States were immigrants, Europe was fighting a World War, President Woodrow Wilson was trying to persuade the United States to join the war, and public sentiment was turning against immigration.

The copper-and-tin bell left Philadelphia on July 4, and arrived in Baker, Oregon, on July 12. 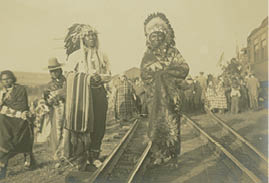 The tribes of Cayuse celebrate the arrival of the Liberty Bell in 1915. 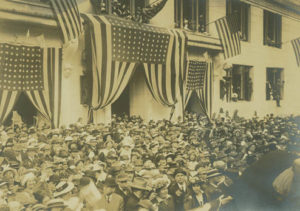 The Liberty Bell in Portland in 1915. 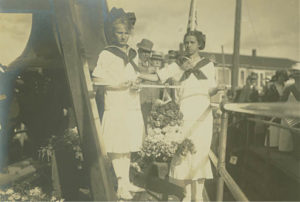 The Liberty Bell celebration in Eugene in 1915. 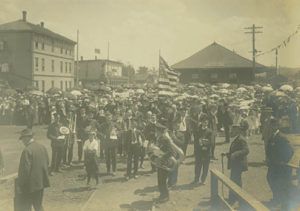 The Liberty Bell celebration in Baker City in 1915. 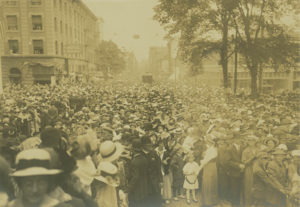 The Liberty Bell celebration in Portland in 1915. 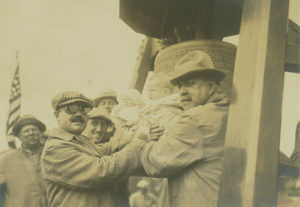 The Liberty Bell celebration in Salem in 1915. 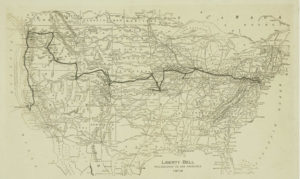 The Liberty Bell's route across the U.S. during its 1915 tour. 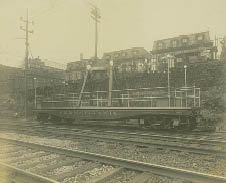 The Liberty Bell's custom made rail car in 1915. 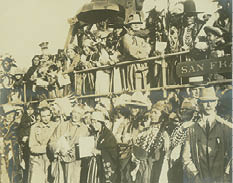 The Liberty Bell celebration in Cayuse in 1915.

Tens of thousands of Oregonians gathered to see the Liberty Bell that July. In Roseburg, boys climbed telephone poles to get a better view of it; in Portland, a judge released prisoners from jail so they could see it, and in Salem, “Men, Women and Children Shout and Scream With Delight and Enthusiasm and Old Men Weep in Joy At Sight of Beloved Relic,” the Salem Capitol Journal reported.

The Liberty Bell was “the silent symbol of liberty by millions of Americans, cherished as the most sacred relic in the country … growing each year more dear to the citizens of America,” The Oregonian reported. On July 4, 1776, the 2,080-pound bell was hanging in Philadelphia’s Independence Hall when the Declaration of Independence was signed, and the bell rang to announce the new nation—a story presented in dozens of schoolbooks, cementing the bell’s legend.

In 1915, President Woodrow Wilson sent the bell on a nationwide train tour, hoping to raise patriotic fervor, and support for Wilson’s plan to enter the First World War, wrote author Stephen Fried in “Saved by the Bell,” in a 2017 issue of Smithsonian. Today, the Liberty Bell is on display at Independence National Historical Park in Philadelphia, where park officials estimate 2.2 million people visit it each year.

The Liberty Bell Special was a custom-designed, seven-car Pullman train. Its sixth car, built with heavy-duty shock absorbers, carried the cracked bell, which hung from heavy oak beams, under a copper canopy. At night, a generator lit the bell so people could see it as its train rushed through the dark.

The Liberty Bell Special was a custom-designed, seven-car Pullman train. Its sixth car, built with heavy-duty shock absorbers, carried the cracked bell, which hung from heavy oak beams, under a copper canopy. At night, a generator lit the bell so people could see it as its train rushed through the dark.

Oregon Governor James Withycombe met it in Weiser, Idaho, on July 12. When the bell and Withycombe arrived in Baker, the governor greeted a crowd of 10,000. “In the name of the people of Oregon I welcome the Liberty Bell into the state,” Withycombe said. “Its visit is a distinct honor to Oregon and the inspiration thus given us should make us better in every way and more useful citizens.” Local school children formed a “human flag” to welcome the train, and the Sumpter Valley Railroad offered half-price tickets to Baker.

After a luncheon at Baker’s Antlers Hotel, Withycombe continued to Union, where he stopped to visit his son, Robert, who was living there. In Union, 500 people met the bell, and the Union Flouring Mill gave children free automobile rides. The train continued to La Grande, where the Jesus Christ of Latter-day Saints chorus serenaded it with “Columbia, Gem of the Ocean.” The local newspaper, The La Grande Observer, was delivered late that day, because all its typesetters went to see the bell.

The Liberty Bell Special continued to Cayuse, where Native Americans performed a war dance. Then the train stopped briefly in nearby Mission at the reservation school, where officials handed out tiny U.S. flags to the children.

In Pendleton, acting mayor John Dyer proclaimed July 12 “Liberty Bell Day,” and ordered all businesses in Pendleton to close from 4:30 p.m. to 6 p.m. Earlier, Liberty Bell officials had asked T.D. Taylor, president of the Pendleton Round-Up, to arrange “some Indians and cowboys at the depot.” Pictures of them were to be used in newspapers and films about the bell’s journey, and Taylor was enthusiastic about publicizing the Round-Up, but he couldn’t organize cowboys and Indians on such short notice. Instead, flags lined the streets of Pendleton, and 1,000 people climbed on boxcars to get a closer look at the bell. Train officials handed out souvenirs—metal badges and bell-shaped pamphlets.

The Liberty Bell left Oregon to enter Washington at Walla Walla, then traveled to Seattle and returned to Oregon on July 15. Just before drawing into Portland at 6 a.m., it stopped at Fort Vancouver and was greeted by the 21st Infantry band. “Negro Soldier Kisses Bell, Vancouver Crowd Cheers Patriotic Act of Sergeant White,” The Oregonian reported. “Sergeant White, a colored solder who has served more than 30 years in the United States Army, today created intense enthusiasm among the 3,000 early risers. ‘I was born under that bell, I have lived under, fought under it and will die under it,’ he shouted.” Later, when the bell was in Arlington, Texas, returning to Philadelphia, a riot broke out when a young black girl kissed the bell, Fried reported.

Once in Portland, a parade led by Grand Marshal Henry Pittock, The Oregonian’s publisher, met the bell. The Third Regiment of the Oregon National Guard, fresh from training at Gearhart, marched in the parade alongside veterans from three wars, politicians, school children and several bands. Forty U.S.-born children of Chinese parents, dressed in Chinese clothing, marched in the parade, delighting the crowd and the train dignitaries.

The Liberty Bell Special officials and the members of Portland’s welcoming committee were presented with bronze medals made by Portland jewelers A. & C. Feldenheimer, with an image of the Liberty Bell on one side, a rose on the other, and the dignitaries’ names engraved below the rose. After breakfast, officials were taken for a swim at the Multnomah Athletic Club. The Oregonian estimated that 60,000 people came to Portland to see the bell.

Two prisoners at the Portland jail—Daisy McWilliams and Anna Edwards—implored municipal judge James Stevenson to release them so they could take advantage of their once-in-a-lifetime chance to see the bell, and he did. Portland’s entire police force was called out to manage crowd control. The train pulled out of Portland just after noon, decorated with thousands of Oregon roses, its dining car stocked with several big Chinook salmon.

The Salem Cherrian Band was playing when the train arrived in Salem at 2 p.m., where about 35,000 people, in crowds that stretched seven city blocks, greeted it. City officials presented the train staff with fresh Salem-grown cherries, and the city’s mail was delivered late that day, because the local postmaster gave letter carriers time off to visit the bell.

The Moose Band of Albany was playing when the train arrived in Albany, where the crowd included people from Corvallis, Brownsville and Lebanon, who had commissioned special trains to take them
to Albany.

The Liberty Bell Special stopped for ten minutes in Junction City to take on water, where several hundred people waited for their brief glimpse of the bell.

Fifteen thousand people waited at the Eugene depot, many of them stationed on nearby roofs. “Where amateur photographers could not get into position to get a good picture, the train staff took cameras and snapped buttons,” the Eugene Daily Guard recorded.

Roseburg’s Elks, in “natty white uniforms,” kept the crowds “moving and in good humor,” reported the Roseburg Evening News. People came to see the bell from all over the area: “Every road in Douglas County leads to Roseburg, and they came from Wilbur, Sutherlin, Coles Valley Roberts Creek, Looking Glass and a score of other near and far,” and “a number of Boy Scouts from way over at Bandon and North Bend said they would not have missed it if the distance had been twice as far, and the canyons swollen with water.”

As the train rushed south to San Francisco to be present for the 1915 Panama-Pacific Exposition, its schedule called for traveling without stopping through Medford before halting in Ashland, triggering a new round of civic rivalry between the two cities. Medford city officials frantically contacted Oregon U.S. Senator George Chamberlain, imploring him to use his influence to get the bell to stop in Medford—Chamberlain arranged for the stop.  When the train pulled into Medford at 2:15 a.m., 5,000 people met it, and “there was an outburst of cheers, and a general lifting of hats,” the Medford Mail Tribune reported. Ashland suspended, for one day, its ban on fireworks, which illuminated the darkness when the bell stopped there for ten minutes.

“I was delighted beyond expression the other day when that splendid old precious relic, the Liberty Bell, came to our state, and to see the spontaneous outpouring of our people to do honor to that old bell … it did us good here to reinspire, as it were, the higher ideals and nobler thoughts of citizenship,” Withycombe said a week later, speaking in Portland to the National Society of the Sons of the American Revolution.