Yet Lee, and wife, Wong Shee, rented a walk-up apartment on Northwest Davis in Portland, where they raised a family and ran the Golden Pheasant restaurant. After the 1849 Gold Rush, Chinese immigrants came to work in Oregon’s mines, canneries and mills. Settled communities grew in Astoria, John Day, Canyon City and Baker. Portland’s Chinatown became the second largest on the West Coast. 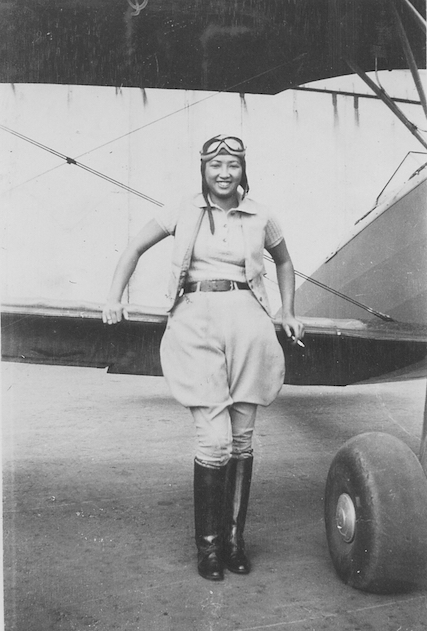 Hazel “Ah Ying” Lee, the second oldest of their eight children, was born in 1912. Following tradition, she helped in the restaurant and studied at the Chinese school. But the skinny teenager was an adventurous extrovert and more athletic tomboy than an obedient daughter. In 1930, she graduated from Commerce High School, taking a job as an elevator girl at Liebes department store. One day she went to an airstrip with some boys who were taking flying lessons. She took a short hop and was smitten.

Hazel signed up with veteran instructor Al Greenwood at Portland’s main airport on Swan Island. Greenwood showed Hazel how to put the small biplane through graceful loops, rolls, wingovers and spins. She took to it, and in October 1932, she became the first licensed Chinese-American woman pilot.

After invading Manchuria in 1931, the Imperial Japanese Air Force flew the first aerial terror bombing raid in history, slaughtering hundreds of civilians in Shanghai. Later the Emperor’s army invaded China and waged total war, committing atrocities that shocked the world. Outraged Chinese expatriates raised cash to bankroll training of a squadron of volunteer pilots in Portland that would fight in China. Soon Greenwood was instructing eager students including Liao Mack, a waiter at Huber’s; Arthur Chin, who would become an ace, and handsome Clifford Yin Cheung Louie, who abandoned a Seattle noodle factory to join up. Clifford and Hazel quickly took a liking to each other.

Two groups of pilots went to China. Hazel ended up in Shanghai, flying for commercial airlines while Cliff and the men joined the Air Force. They saw heavy combat, knocking down many Japanese planes and taking casualties.

Barred from military aviation because she was a woman, Hazel worked at a desk at the Commission for Aeronautical Affairs. In Canton (Guangzhou), she watched helplessly as Japanese bombers blasted the city on Easter Sunday 1938. Determined to do more, she returned stateside. 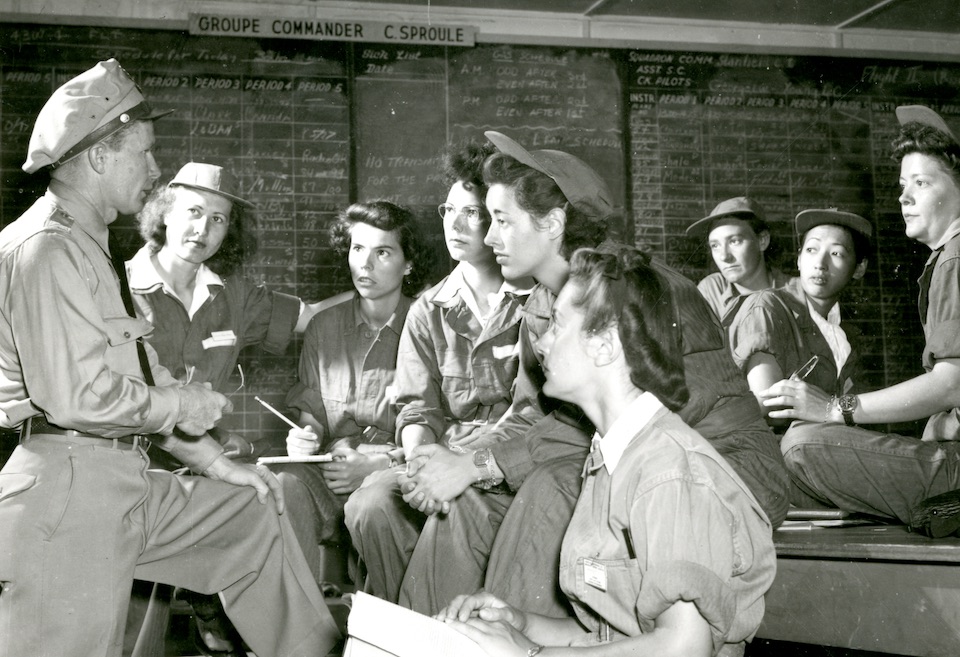 WASPs were trained at Avenger Field in hot, windswept central Texas, near Sweetwater. The six-month program was rigorous. Of some 25,000 women who applied, just 1,074 completed the course, earning the coveted silver wings bearing the shield of Athena. After learning how to fly the Army way, WASPs were assigned duties at air bases around the country.

Hazel entered the program in February 1943. The first Chinese-American woman to fly for Uncle Sam, she might have seemed out of place. She gleefully capitalized on her ethnicity, inscribing classmates’ nicknames in Chinese characters with lipstick on their airplanes. 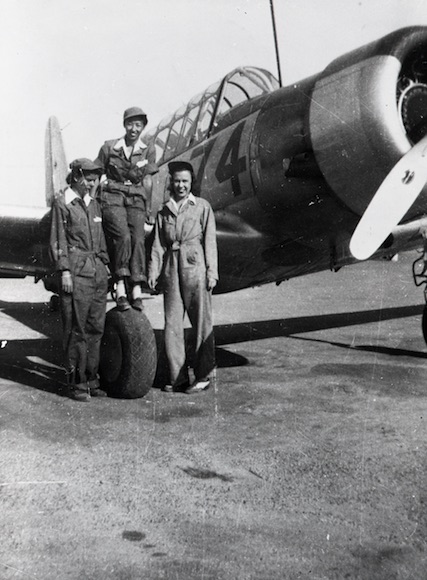 A highlight of training was a visit from Cliff. Now a major, he had downed three Japanese planes. The couple, engaged, decided to wed.

Hazel was assigned to the Third Ferry Group at Romulus, Michigan, rushing airplanes right off production lines in Detroit to distant bases. In October 1944, she attended Pursuit School, becoming one of just 132 women rated to fly the hottest ships in the military.

Ferry work was challenging, requiring pilots to fly as many as two dozen different aircraft types. Hazel was thrilled to check out in the new Bell P-63 Kingcobra fighter plane. Dozens of P-63s arrived over Great Falls on Thanksgiving Day. Hazel checked in, entered the pattern and set up a smooth final approach. Unseen, another P-63, with a dead radio, was making a steeper approach, overtaking her. The tower radioed both to go around. The other P-63 continued its descent, colliding with Hazel’s plane.

Both planes hit the runway and skidded. The top plane’s wing tank exploded, enveloping both in flames. A lieutenant colonel sprinted into the fireball to pull Hazel out. A crash crew rescued the other pilot.

Hazel sustained severe burns. She lay in the base hospital for two days conscious, while doctors worked to save her. She died on November 25, 1944, after asking about her husband. The Lees received telegrams informing them they had lost two children in the same week. Hazel’s younger brother, Victor, was in the Army when his tank destroyer crew came under fierce combat near Merten and he died.

The Shield of Athena

Since the WASPs were technically civilians, Hazel was not entitled to a military funeral. Sister Frances made arrangements with Riverview Cemetery, and on December 1, 1944, Hazel was laid to rest. 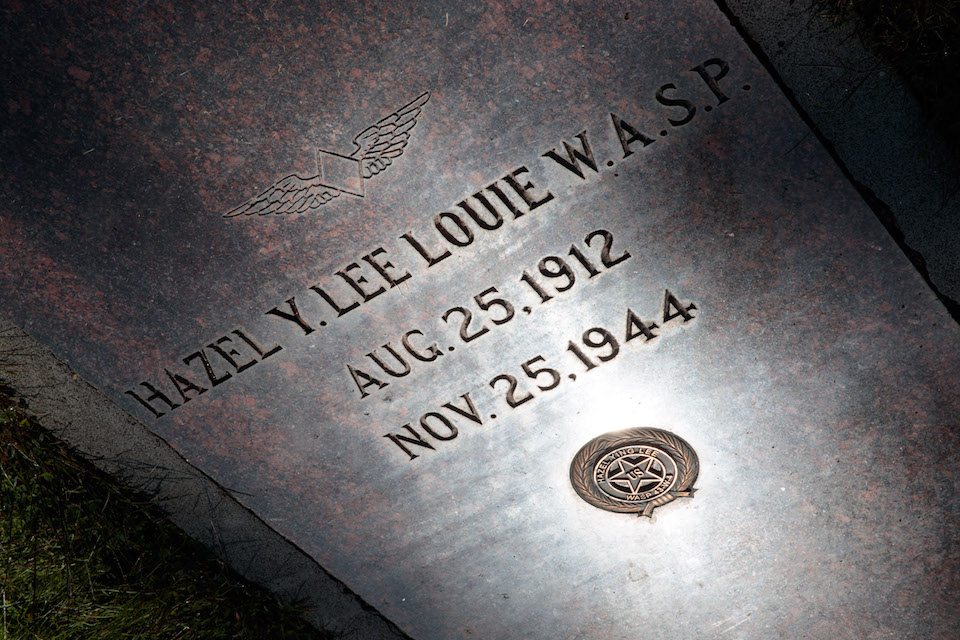 High on a gently sloping hill in Riverview Cemetery, a polished slab of red granite nestles in the closely cropped grass. Just above Hazel’s name a familiar symbol is etched: a winged diamond resembling the shield of Athena. It symbolizes the silver WASP wings pinned on uniforms of American women who flew for their country in the Second World War.

Sixty years after her death, the State of Oregon inducted Hazel into the Aviation Hall of Honor, a fraternity of native Oregonians who made contributions of significant historic value to aviation.