“He had seen some of my previous work, and said, ‘make anything you want,’” McLean, 54, recalled.

The liberty gave rise to a sixteen-foot-tall, candy-apple-washed steel sculpture, punctuated by delicate angles reminiscent of a boat’s sails—hence, the name “Odyssey.” As with most creatives, this freedom of direction is how the artisan prefers to fabricate pieces. McLean’s playful nature is his most vital tool in testing different materials, shapes, colors and ideas. 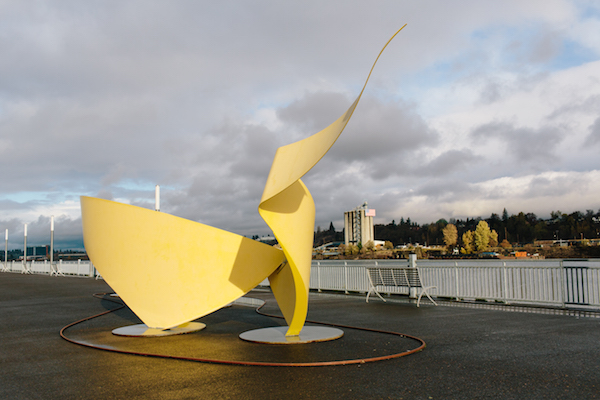 His studio in northeast Portland, a shared space with Delia Furniture, is his playground. The winter chill flowed freely through a massive open garage door. The clanging of pounding metal and grinding machinery echoed off the high ceilings and bare walls of his warehouse.

A boneyard of projects spilled across the studio and out into the parking lot. Piles of long, curved tentacles used to suspend a tenfoot DJ booth for a local music festival. Tables were covered with thick plates of brightly pigmented glass from a recent collaboration with a local children’s charity. Sheets of freshly painted steel awaited assembly.

Despite the perpetual draw to metal’s versatility, McLean refuses to limit himself to a single medium. He also carves marble and wood, dabbles with resilient glasswork, and loves the challenge of incorporating random materials such as barbed wire or old silverware.

Experimenting with crafts always came naturally for McLean. Growing up in rural Central California, he learned to weld out of necessity. In high school, he worked on ranches near his family home. He figured out how to make quick fixes on broken machinery. 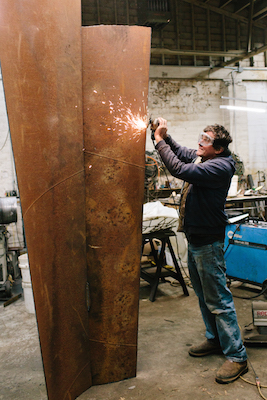 Rural life led him to study farm management at California Polytechnic State University. Instead of returning to Marin County upon graduating in 1983, McLean spent two years living in the Philippines while in the Peace Corps.

He didn’t start experimenting with media as art until returning to the United States in 1986. McLean, his brother and a couple friends began making furniture, and selling it at flea markets and through small wholesale companies. The group crafted distinctive gates, wine racks and household accessories using mixed materials.

“People are more afraid to buy art for art’s sake,” he said. “It used to be my joke—put a candlestick out there, and somebody will buy it.”

After a 2001 downturn in the furniture business, McLean took a risk to create art full time. He quickly realized his own fearlessness in experimentation, with much of his work originating simply from playing with materials. Some of his most recognizable pieces—his spheres—came about by toying with round propane tanks. 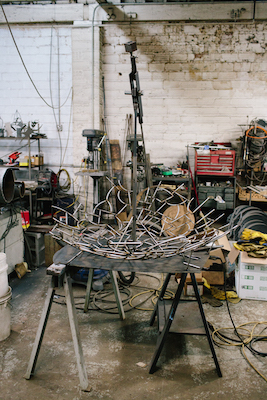 “I just started taking this extra metal and connecting it on the outside of the ball,” McLean said. “I made them occasionally to get rid of scrap, but then they became more of an art object.”

The intricate orbs are made from fused lengths of metal, creating lacey patterns that viewers can interact with—rolling them around or watching from different angles as the sun casts patterned shadows through a piece. “That’s what I love about the spheres, they look Photoshopped,” he said. “It looks like they aren’t touching anything.”

One of the most important parts of his work is creating large-form pieces.

“It’s all about the human scale,” McLean said. He could make a basketball-size sphere work, but admitted it wouldn’t have the same impact as a piece twice the size of an NBA player. “It’s your relationship to the piece. It’s fun to walk under things and to interact.” 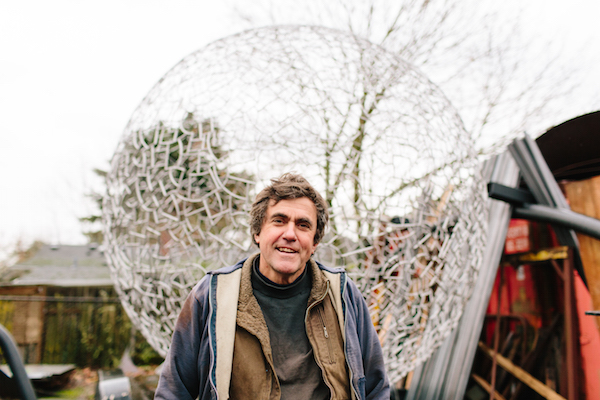 Ultimately, McLean wants his art to be equally appealing to touch and sight. Over the past few years, he created some of the iconic installations for What the Festival, an electronic dance music event in Oregon.

This year, he debuted The Dragon Stage. At more than twenty feet long, the dragon’s steel skeleton was wrapped in sheer plastic skin with intricately painted scales. A pagoda-like DJ booth rode on the creature’s back. To add authenticity, McLean rigged it with a propane tank, so it could spit an eight-foot flame.

Initially, he wasn’t sure how to make it all work. McLean recalls his motto from time spent traveling rural Australia in his twenties. “I just figure I’ll see what happens.”