To understand Aaron Meyer’s journey from being a classical violinist to a concert rock violinist, begin by listening to his music. 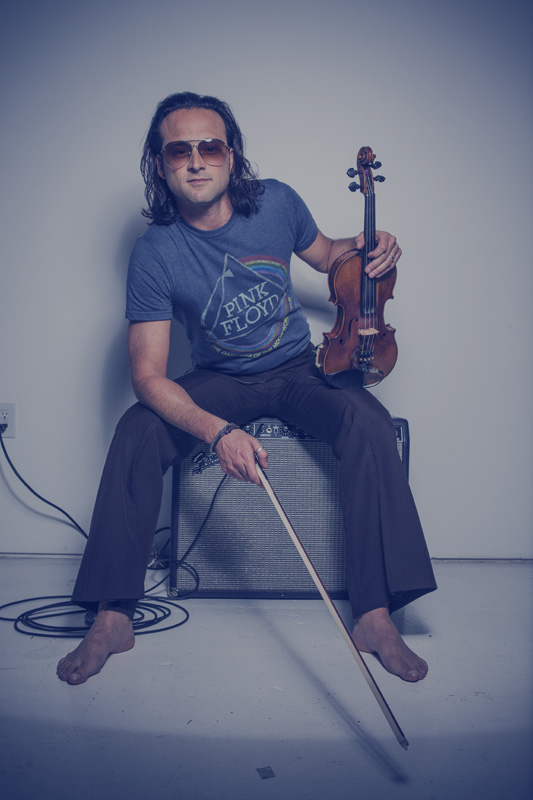 His album “The Journey … not the Destination” transports listeners to the Fiji Islands, Ireland, Arabia and Argentina. “Warming Up” shares how wine creates memories and friendships and “Two Sides to This Story” emphasizes how he and guitarist Tim Ellis work together to create their own music—edgy progressive rock with worldly flavors.

“What I love about my music is the places it has taken me and the people I have met,” Meyer says. “Music is the vehicle to my paths of exploration.”

Sitting in the garden of his Portland home with his two dogs, Meyer wears a faded “Lucky Game Day Shirt – Oregon” and basketball shorts, his long brown hair pulled back in a ponytail.

He has played the National Anthem at Portland Trail Blazer games and performed original music for the Dalai Lama. He has shared the stage with Pink Martini and The Temptations, and taught music lessons to kids at private schools to remote villages in Burma and Fiji. “I love getting to meet the different people and learn about their journey,” he says. “It all has an influence on my music.”

A large, violin-shaped cake inspired Meyer to learn to play the violin. One of his father’s violin students won a competition to play with the Philadelphia Orchestra when she was eleven. “After the concert, there was a party at my house to celebrate her performance,” he recalls. “I remember seeing this cake and asking my dad if I played a solo with the Philadelphia Orchestra, could I get a cake like that.”

His father agreed and at five years old, Meyer began to earn his cake. “I was practicing the violin three hours a day when I was nine years old,” he says. “I don’t want to say I had an unfair advantage having my dad as a teacher, but the key to learning the violin is doing it right.”

The first time he entered the competition at age nine, he didn’t win. At 10, he tried again and won. The following year, he debuted with the Philadelphia Orchestra.

“I played Kabalevsky violin concerto in C major, and it was unbelievable experience,” Meyer, now 40, says. “The conductor grabbed my hand, and I was on a crazy high. He asked me if I wished if I could play ten more times, and I said yes. He asked the audience if they would like to hear me play again, and they did. I was the only person to play twice, and it has never been done again.”

The next day, Meyer announced he was done and wanted to be a ”normal kid.”

After arguing this point, father and son agreed he would study with another violin teacher. “My dad knew how much I loved playing the violin,” he says.

Meyer attended Indiana University to major in violin performance and started freelancing for orchestras. He learned there were many amazing players competing for a few seats in the best orchestras, where the pressure to be perfect loomed. “If you miss one note in classical music, people notice,” he says.

At 19, he closed his violin case and moved to Portland to attend Lewis and Clark College with the goal of going to medical school.

His first Grateful Dead concert in 1991 changed everything. “The Grateful Dead were the antithesis of what I was taught as a classical violinist – structure,” he says. “They were about chaos and energy.”

After graduating from college, he traveled with a friend to Southeast Asia and the South Pacific. From hiking in the Himalayas and bicycling in Vietnam, to eating the food and listening to the music, the eleven-month adventure was “a powerful and awakening education.”

Returning to Portland, he worked with Pink Martini. “Playing with Pink Martini and learning from Thomas Lauderdale helped me to break out of my box of what I thought music was and invent myself,” he says. Each experience helped Meyer conceptualize and pioneer his own music.

“The music I am playing is mine,” he says. “It evolves and changes and grows. It is truly all over the map as far as styles and sounds. What I love about it is anything can happen.”

To learn more about Meyer and his upcoming concerts and classes, visit aaronmeyer.com.