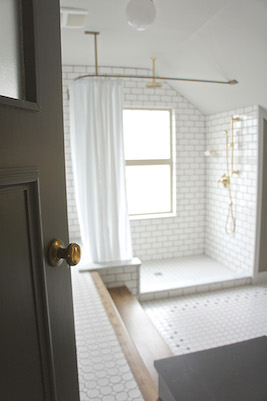 IT’S A UNIVERSAL TRUTH that as soon as construction starts in any neighborhood, the neighbors get curious. Such was the case when Brandt and Chelsea Kaemingk remodeled their Lincoln City home in 2011. By the time they finished, the couple across the street was eager for a tour.

That visit was all it took for them to enlist the Kaemingks, owners of Chic Design Investments, to remodel their house. The problem? “It was a real mishmash on the inside,” recalled Chelsea. “The layout was horrible.”

It was so bad that the homeowners avoided the upstairs all together, which had four cramped bedrooms, a narrow bathroom, and a steep staircase that they seldom risked climbing. Additionally, the roof pitched dramatically in spots, creating a variety of ceiling angles and making the small rooms feel even more claustrophobic. The Kaemingks reimagined the unused space, complete with a bathroom that would be more of a destination. 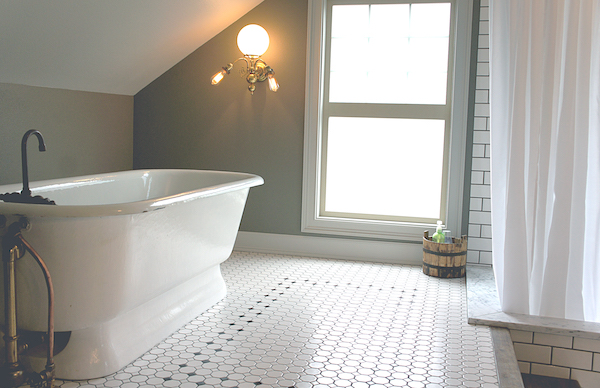 To create the bathroom, they combined two bedrooms and relocated the staircase. Once the walls came down, a challenge appeared: a step just inside the door. “We could have leveled it,” says Brandt. “But we kept it as a unique feature instead.” Now, the step establishes the free-standing tub as a focal point and offsets a generous walk-in shower. 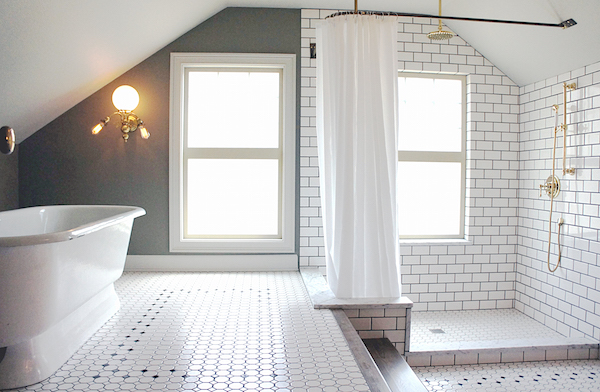 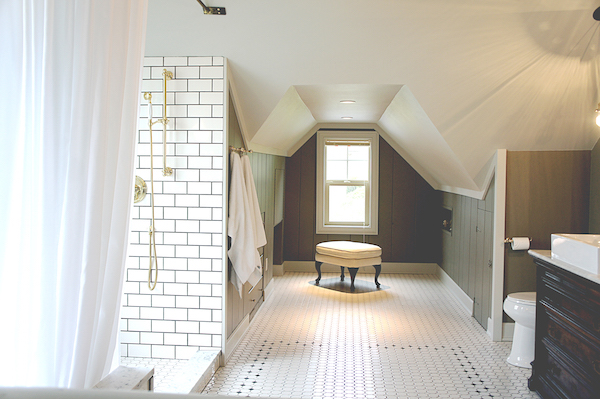 Salvaged finds, classic material choices, and the traditional color palette combine to cast the room in a romantic light. An unfitted vanity, fashioned with an antique dresser from a local shop, was paired with its mirror and a single pendant light. Brass plumbing fixtures and a reclaimed Victorian sconce connect with the vanity’s original hardware. The ceiling angles, once so awkward, now serve to frame a built-in vanity area where the homeowner can perch. The new room exudes vintage character and ambience, toward which the homeowners now eagerly flock. 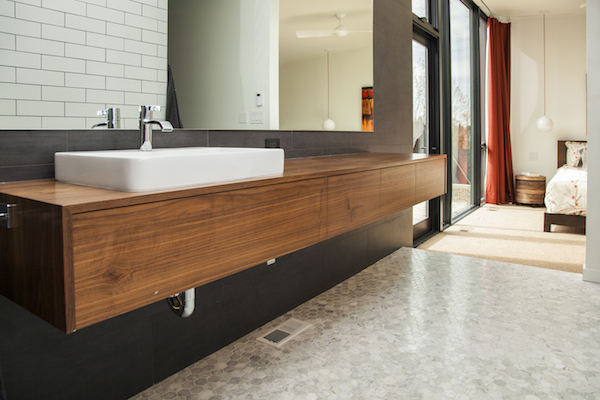 WHEN ERIC THOMPSON, a developer with Oregon Homeworks, decided to build his own home in Northwest Portland, he knew what he was after. “I wanted a very modern home that was very green but also very open to the landscape,” he said. He tapped award-winning architect Corey Martin of THA Architecture to envision the final product. The results push the envelope. “We eliminated walls and doors where we could, so that the interior spaces blended seamlessly with each other and the outdoors,” said Thompson. This strategy was extended to the en suite bathroom, which unifies clever space planning with high-quality finishes, chosen by interior designer Jenise Adams. “The bathroom was meant to be a microcosm of the whole house,” Thompson said. 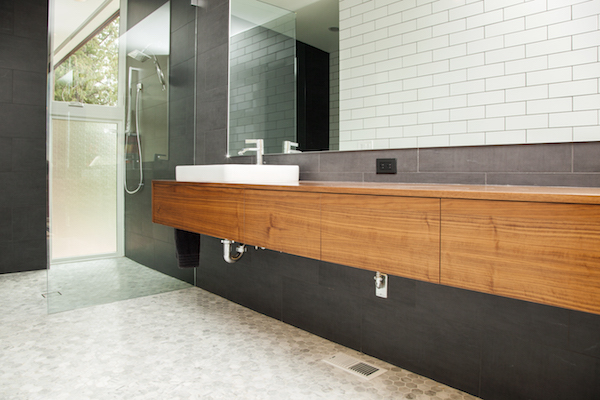 A single step delineates the transition from the bedroom into the bath. Along one wall, a custom floating vanity with hidden storage extends ten feet. Crafted of black walnut by Earthbound Industries, the vanity anchors the room. Its natural patina warms the spare color palette. The opposite wall, covered in sleek elongated subway tile, fronts the principle closet with its built-in walnut shelving. Nearby, the path to the toilet doglegs through the walk-in shower. “Even though there are no curbs or doors, you still get the privacy you want,” Thompson said of the floorplan. 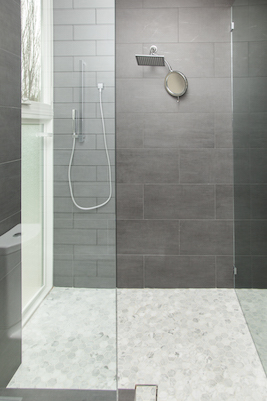 Thanks to a generous east-facing window in the shower, the privacy glass provides decorum while connecting the room to the outdoors and bringing in abundant natural light. A simple frameless mirror further illuminates the interior to augment daylighting. Underneath the marble tiled floors, a sophisticated radiant floor heating system utilizes an energy efficient geothermal heat pump. Overall, the mix of clean lines and natural materials ensure the bathroom stays modern and livable well into the future.