The giant sequoia of Queen of Angels Monastery

More than 700 miles from its native range in California, a 125-year-old giant sequoia tree welcomes visitors to the Queen of Angels Monastery in Mount Angel. In 1893, Sister Protasia Schindler found the seedling growing beside the railroad tracks. She immediately dug it up to plant next to the monastery’s entrance. Many years later, she said that if she’d known how large it would grow, she never would have planted it so close to the monastery.

The tree now dwarfs the building as well as the other trees on the grounds, including one of its progeny planted in 1982. In 2004, the giant sequoia was designated an Oregon Heritage Tree. This honor is bestowed for an individual tree’s historical significance, accessibility to the public, and general health. The Benedictine Sisters at Queen of Angels welcome people of all faiths for personal, overnight retreats, or for shorter visits to explore and enjoy the grounds.

Learn more about the Queen of Angels Monastery. 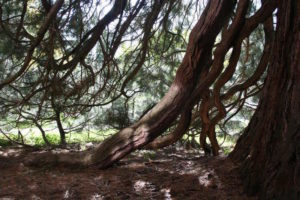 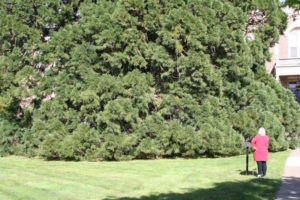