Once the slogway for huge log trucks rolling, loaded to the tops of their bunks, through the murky woods from Eugene to Florence, Highway 126 is, these days, more the thoroughfare for pickups and SUV’s hauling toys to the river and coastal dunes. A ghost of a lumber mill outside of Mapleton, complete with its rusting “wigwam” burner, is a reminder of a bygone era when timber was king. 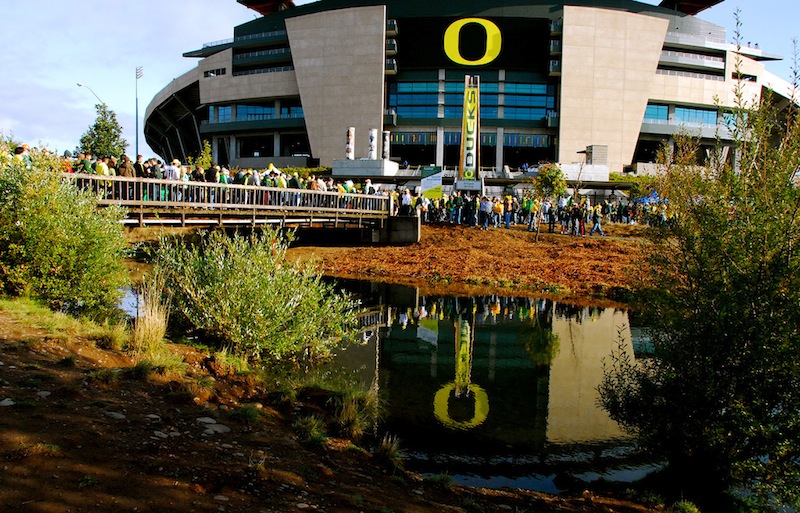 West of I-5 between Springfield and Eugene, the highway that becomes OR 126 rolls past the Oregon Duck football home of Autzen Stadium, with the Willamette River flanking it to the south. It dodges past Skinner’s Butte and the Rose Garden, and through strip malls and fast food joints on the west side of Eugene. Just outside the western city limits, the mileposts count down the distance to the coast and carry you to into the past and the future.

The scenery quickly turns rural here. Fern Ridge Reservoir helps to mark the transition. Just about milepost 51, the vast water storage lake is refuge to waterfowl and wildlife and people who relish a good walk with nature. During the summer, Fern Ridge offers sailing, swimming, fishing and more. Winter brings out bird watchers and solitude seekers who enjoy its damp, misty mudflats.

On its western shore lays the Applegate Trail, near milepost 49. It’s here that signs indicate where European immigrants first traversed this land as they followed a southern route of the Oregon Trail, first blazed by Kalapuya natives hunting for game.

Preceded by the first of a few local wineries, Sarver, Sweet Cheeks and Silvan Ridge among them, the urban refuge of Veneta pops up at about milepost 48. Not much more than a pit stop with a single semaphore, it’s a good stop for coffee, snacks and pizza.

Just a short trip beyond Veneta is one of the more “trippy” venues on the highway … at least during the Oregon Country Fair. A prominent sign of the times, complete with its signature peach, the site of the iconic hippie festival rises at about milepost 46, but you won’t need a sign to find it come July. Plenty of folks will be turning off the road and tuning in to the counterculture.

To catch a glimpse of the big driver of the regional economy from years gone by, turn off at the Noti Loop Road, at about milepost 43. You can still see a major lumber mill in action there—a living legacy of the natural resources industry that built Oregon timber legends, captured in the novel Sometimes A Great Notion, by Ken Kesey.

The Coast Range, through which the highway cuts, was home to massive old growth forests. Timber “barons” came through and cut swaths for their wood products empires. The Benedict House, farther toward the coast on an island in the Siuslaw River near Florence, was reportedly Kesey’s inspiration for the Old Stamper Place in his novel.

Times have changed, and a new breed is taking to the highway, pulling their “toys” behind them. Natural resources, though, still lure the traveler here, say Curtis and Lisa Selby, who cater to visitors at the old Walton Store at about milepost 33. “Travelers come for the fishing in the Siuslaw River and the sand dunes at the coast,” says Lisa. 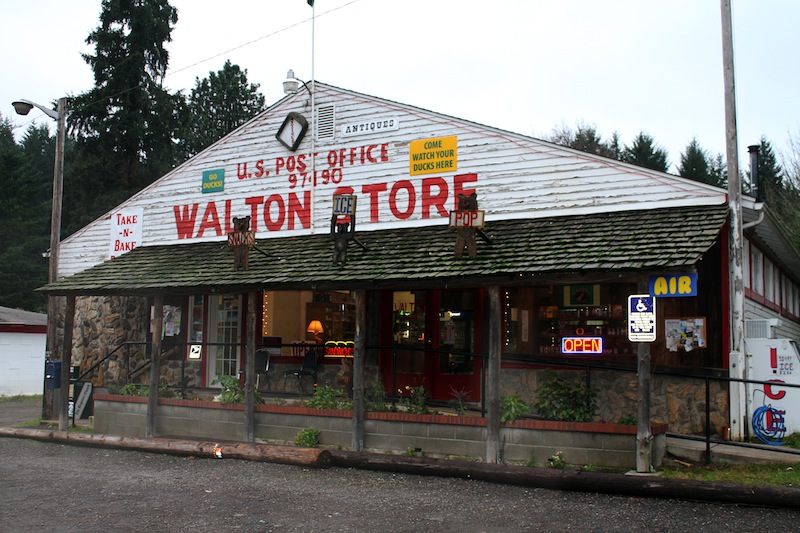 The Siuslaw River begins to make its presence felt at about milepost 26. There are a few campgrounds near the river, such as the Archie Knowles Campground at milepost 18. It’s such a short drive to the coast that most folks continue their journey, leaving the limited number of campsites for people seeking the sights and sounds of the rushing river. Archie Knowles is open from Memorial Day to Labor Day only.

At milepost 15 or so, Mapleton is a community where the past and present collide. It’s easy to imagine rafts of logs coming down the river, headed to mill and market. During its early years, Mapleton served as a riverside way station, but today it serves the needs of people who come by car, truck and RV.

Closer to Florence, the river widens. The Benedict House should be visible on Cox Island, just past milepost 2. The house is on the National Register of Historic Places.

Past the Three Rivers Casino at milepost 1 and connecting to US 101 into Florence, the picturesque Siuslaw River Bridge comes into view from the vantage of Old Town. It’s one of the bridges designed by famed bridge architect Conde McCullough for the old Oregon Highway Department and itself is a magnet for travelers. 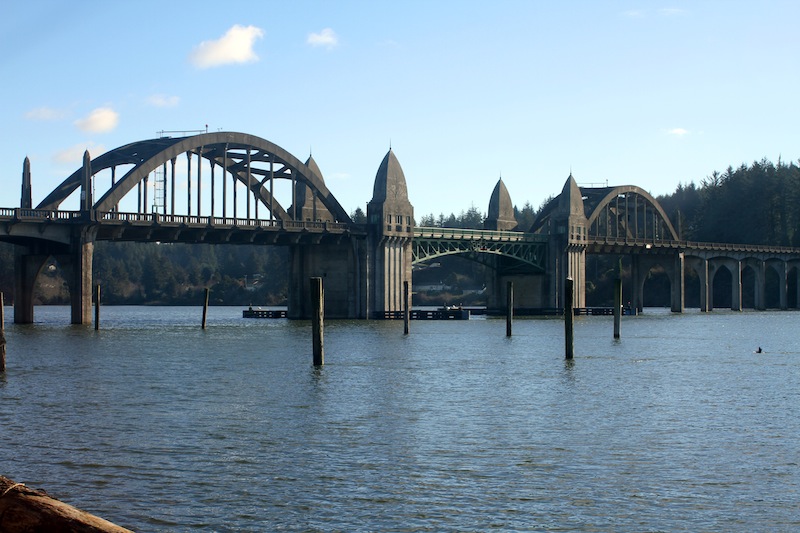 McCullough’s Siuslaw River Bridge opened in 1936 to the delight of motorists who had to use ferries to cross the river prior to that time. Built with funds from the Public Works Administration of the Depression Era, the four Art Deco-style obelisks house mechanical equipment and living quarters for the bridge operator. The total cost of the bridge in 1936 was $527,000.

At Books and Bears bookstore on the waterfront promenade, owner Sue Foster says the bridge is what makes Old Town. “People come from far away to see it, and some tell me it’s like a scene out of Scotland,” she says. “Oh, and they come for the dunes, too.” 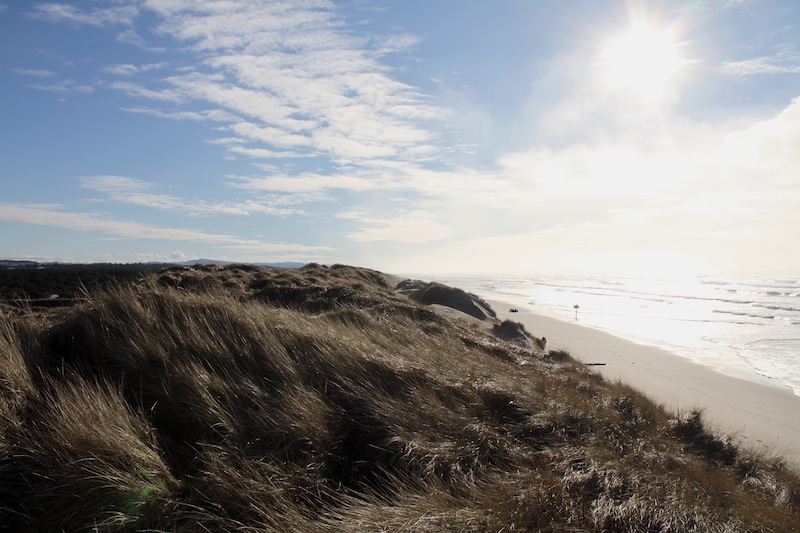 Tracy Stegers came from Louisiana via Napa, California. “Florence reminds me of England,” she says, “Small and rainy.”

Florence is the northern jump-off point to the Oregon Dunes National Recreation Area. For travelers adventurous enough to get out into the surrounding natural habitats, it’s a wonderful stop. For those seeking a quick drive from the Willamette Valley to a diminutive, charming coastal enclave, Oregon 126 to Florence is the road for you.