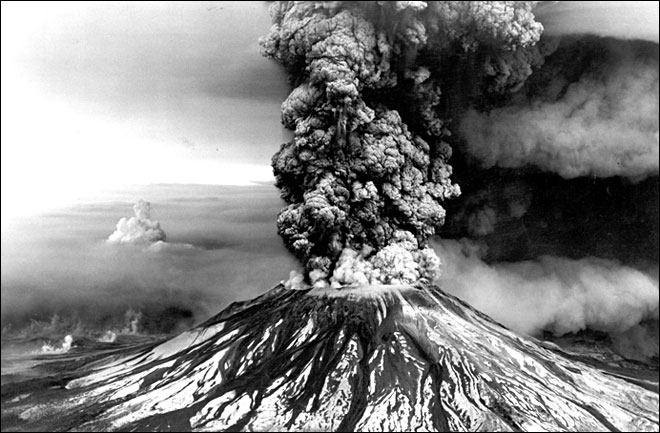 ADMIT IT—PLAYING OUTSIDE IN OREGON CAN MAKE YOU SO HAPPY, you could explode. That’s fitting considering the fiery, eruptive past that lies beneath our feet. Reaching for the next hold on a basalt rock wall, rappelling into a glacial crevasse, mountain biking a pumice-laden trail, skiing a powder-covered slope or roaming through a wildflower-filled alpine meadow—endless pursuits of fun are inextricably linked to hundreds of thousands of years of lava-spewing. With summer at its peak, we’re out on our volcanoes in earnest. And when the inevitable profound sense of wonder kicks in, a crash course in Oregon volcanic history will help put it in perspective.

BEGIN BY REWINDING ABOUT 40 MILLION YEARS. The Juan de Fuca Plate beneath the Pacific Ocean moves downward, and becomes so hot it sweats seawater and other fluids. That causes melting in the overlying North American plate and creates magma. That magma built up over hundreds of thousands of years, creating the volcanic mountain peaks that surround us today. 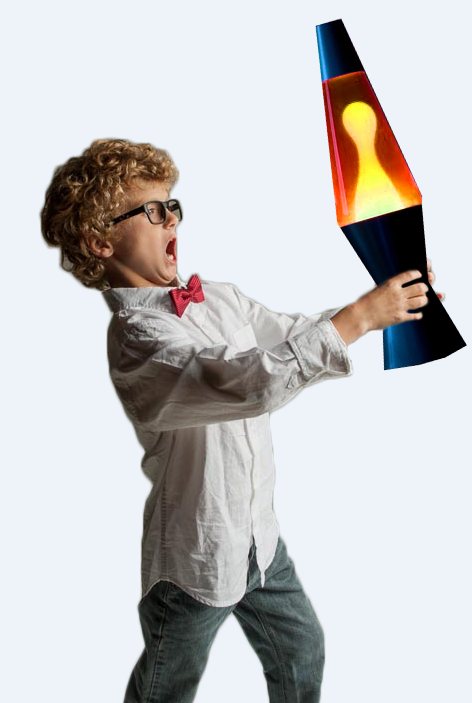 In the book In Search of Ancient Oregon, geologist Ellen Morris Bishop chronicles the landscape’s dramatic past. One of her favorite ways to take in a range of volcanic features is with a two- or three-day hike along the Pacific Crest Trail heading toward South Sister. Footballshaped rocks with aerodynamic tails reveal ancient activity. She can envision the genesis of these “volcanic bombs” hurtling high into the air, cooling as they spun and hardening into shape before falling to the Earth.

Farther along the trail—at the base of North Sister, is the Collier Cone—a mound of solidified lava bits. It looks like a gigantic mound of coffee grounds. The uninitiated might consider it an ugly cousin in front of the dazzling sister, but it beckons Bishop.

“It’s not a big deal, but it’s a nice, classical cinder cone,” she says. “Walk to the top, where there’s a little crater about thirty feet deep.”

Roaming the wilderness of the Three Sisters, the untrained eye feasts on their beauty, at best noting their varying height and general shape. Bishop, however, sees three volcanoes of distinctly different composition. South Sister is mostly white-grey rhyolite, the result of pasty, slow moving lava. Middle Sister is grey andesite, a mix of basalt and rhyolite, and North Sister is dark, iron-rich basalt.

If fifty shades of grey rock doesn’t do it for you, consider that in the late 1990s, South Sister became restless, showing signs it could blow at some point in the future.

“Every geologist in the world was cheering it on,” Bishop says. “I thought it would’ve been interesting to see Oregon have a small but active eruption.”

No such luck. Geologists believe magma—molten rock a few miles underground—pushed up into the Earth’s crust and inexplicably halted, but not before causing an uplift, or bulge of about ten inches over a ten-mile-wide area.

The area is monitored by the U.S. Geological Survey’s seismic and deformation sensors, which detect preliminary activity to eruptions, says William Scott, a volcanologist who has worked for the U.S.G.S. for almost forty years—the only job he’s ever had. “I’ve been doing this so long, it’s kind of like, whenever I’m out, I think about why things are the way they are, and what happened before,” he says. “Just driving around and seeing the landscape, I think of what created it. It’s kind of a disease, off the scale for most normal people.”

Scott is captivated by Oregon’s evidence of some of the largest lava flow eruptions on Earth, which peaked around 15 million years ago. Some flows made it from the Idaho border to the Pacific. The Columbia River basalt lava flows surged from fissures in northeastern Oregon and beyond. Today they form the cliffs along the Columbia in Hood River and in the Blue Mountains. These flows had crossed the ancient Cascades, flooded through the Columbia River Gorge and low areas, and into the northern Willamette Valley and out to the coast. They are prevalent in areas such as Cape Lookout and Saddle Mountain.

Volcanologists continue to watch Mt. Hood because it was the last Oregon volcano to erupt, though the probability for another eruption soon is low, says Scott. Its last major eruption was from 1781 to the mid-1790s, but celebrated Oregon’s statehood with a smaller eruption in 1859. Previously, it had been erupting repeatedly over hundreds of thousands of years, allowing it to grow to be the state’s highest peak at 11,239 feet. In geology lingo, it’s a composite volcano.

The relatively recent activity on Mt. Hood offers features that fascinate as well, says Bishop. The Eliot Glacier is accessible via a trail from Timberline Lodge. Punctuating the path of fine, sand-like volcanic ash, are smooth, white skeletal remains of trees blasted by the force of eruptions, and left pointing away from the mountain.

The reward at the end is the glacier, says Bishop, and seeing it will evoke the fateful events of Oregon’s volcanic past as well its future. “We will lose it eventually due to climate change,” she says. “The glaciers in the Cascades are retreating. The Collier and Eliot glaciers are much smaller than a century ago. You really ought to go see the glaciers while they’re still there.” 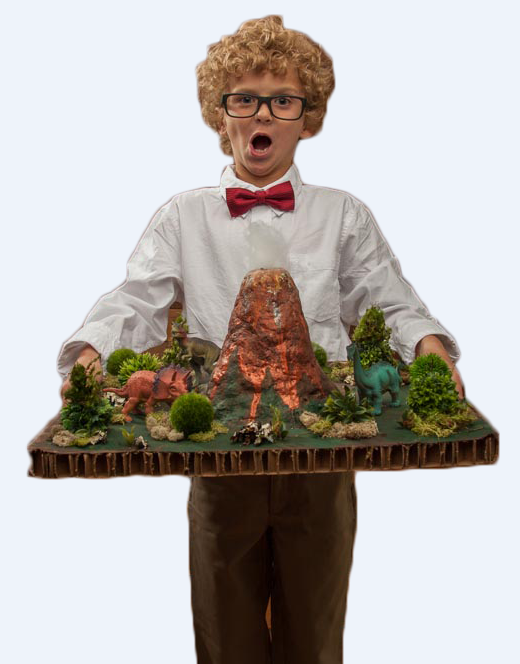 “The plug is not only highest point, it’s good to climb on without the rock breaking beneath you,” says Agocs. Anyone in good shape can do the guided climb in one day, with basic skills taught the previous day, he says. “You reach the summit and look to Mt. Hood, Adams, Bachelor, and Thielsen—a pretty unique setting for one hard day of fun,” he says. “It’s high-fives, celebrating, all that great stuff, then you rappel to the bottom of the summit plug and hike back out. It’s a strenuous accomplishment and also a really fun day.” 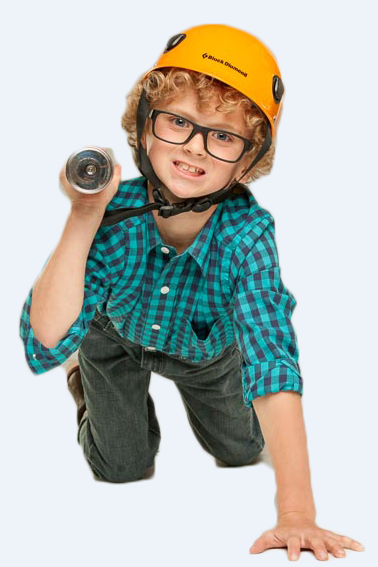 Lava that once flowed underground has left behind hollow tube-like caves. Explore Lava River Cave, a mile-long lava tube near Sunriver and the Newberry National Volcanic Monument. Descend 150 stairs to enter the cave, and allow ninety minutes to navigate the uneven floor with temperatures at a consistent 40 degrees.

The U.S. Forest Service warns that to prevent the spread of “white-nose syndrome” to bats, do not bring gear or wear clothes used in a cave or mine outside of Oregon or Washington. This disease, in which bats’ noses turn white with fungus, has been responsible for the death of millions of bats, mostly on the East Coast.

Wanderlust Tours of Bend (wanderlusttours.com) offers cave tours off the beaten path. They’ll outfit you with helmets and headlamps, and naturalist guides will help you discover secret rooms as well as the caves’ natural history, flora and fauna. 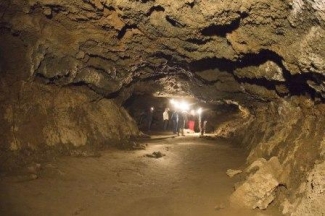 Explore with a Ranger

At Lava Lands Visitor Center, the interpretive hub of Newberry National Volcanic Monument just south of Bend, park rangers lecture about Oregon’s largest volcano, a thirty-mile-wide, shield-shaped formation. Geologic and cultural history is also detailed through an exhibit and films. On the Trail of the Molten Lands, meander over the 7,000-year-old lava flow from Lava Butte, the imposing dark cinder cone behind the visitor center. Or drive to the top of Lava Butte for a panoramic view of the surrounding landscape.

Terra Kemper, a lead ranger at the monument, says one of her favorite places is the Newberry Caldera. The 1.5-mile Little Crater Trail lets you circle the Little Crater Cone and see the Big Obsidian Flow, East Lake, Paulina Lake, Paulina Peak, the Central Pumice cone, and the entire rim of the caldera.

“At Benham Falls, you can see how lava has changed the course of the river,” Fisher says.

Drive a paved road or walk trails to the summit of 4,097-foot Marys Peak, fifteen miles southwest of Corvallis. The reward: panoramic views from the Cascades to the Pacific, says Phil Hays, a hike leader for the area’s Native Plant Society of Oregon chapter (npsoregon.org).

Think back to how this was an underwater volcano until an uplift brought the Coast Range above the ocean surface millions of years ago.

Watch for Western fritillaries, swallowtails and blue butterflies gathering nectar from lilies, violets, yarrow and other perennials in the meadows of the peak in summer.

skibowl.com). Launch off a threestory tower and sail 800 feet. Flip, twist, swing or white-knuckle it, but enjoy the view and consider your relative safety. Had you been doing this about 300 years ago, you would’ve been incinerated by Hood’s fiery eruptions.

If you’d rather feel more like the lava that flowed down these slopes, hop in to Skibowl’s alpine slide. Fly down a half-mile track of twists and turns through mountain meadows. Two side-by-side tracks let you ride alongside family and friends as you take banked turns, S-curves and hairpin thrills. The Scenic Sky Chairs lift you to the apex of the 350-foot descent. You can slide down at up to thirty-seven miles per hour, but you control the speed with the brakes at your fingertips.

Mt. Hood’s Eliot Glacier offers easy access to beginner ice climbing routes. “It’s as close as you could get to a climbing gym,” says Agocs with Timberline Mountain Guides.

The surroundings, however, are quite the opposite. You are on ice formed from snow compressed over the course of hundreds of thousands of years. Inside the crevasse, a blue-hued ice skeleton, revealed after surface snow has melted, is just about as stable as rock.

Walk right up to a thirty- or fifty-foot deep crevasse, throw on a jacket, and get belayed down. Connect with your inner Yukon Cornelius as you dig ice axes into the ice, kick in your crampons and climb.

“You manage the risk to very high level, so you could easily take the kids and not feel guilty about it,” says Agocs. 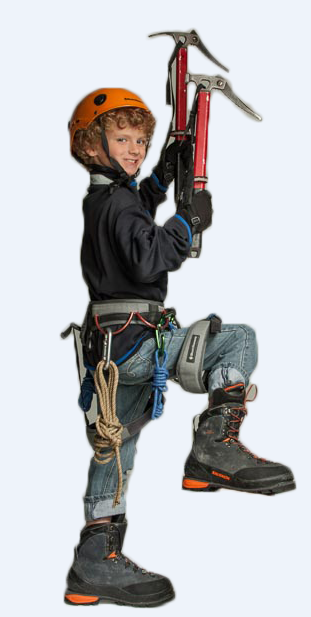