Stop B2H Coalition, a small nonprofit centered in La Grande is working day and night to preserve the Oregon Trail from Idaho Power

An estimated 80,000 early pioneers arrived in Oregon on the Oregon Trail, passing over the American West and etching their journey in miles of wagon wheel ruts. These ruts stand witness to an historic and epic journey, the evidence still visible almost two centuries later. But as Smithsonian magazine put it back in 2016, some of these ruts are in “danger of destruction as municipalities push to stretch bigger and better power supplies across the region.” That’s the case in Oregon, where a long-proposed project could change the view forever.

It’s a battle over the desert, farmland, forests and big skies of Eastern Oregon—with scant attention from the rest of the state. It’s a tale of underdogs fighting enormous odds to protect what’s theirs, and what their opponents want and seem to have the power to take. It’s about 7 treasured miles of ruts near the National Historic Oregon Trail Interpretive Center outside Baker City. It’s also about something most of us want and need—cheap, plentiful and reliable electricity to power our homes and businesses—but in Idaho.

At issue is a proposed high-voltage power line that would run 300 miles from Boardman, Oregon, to Hemingway, Idaho, known as B2H. Depending on one’s perspective, B2H will either build capacity and flexibility to support population growth and new industries, or destroy sensitive wildlife habitat, spoil views for residents along the line and visitors to the National Historic Oregon Trail Interpretive Center, and trash the Oregon Trail.

The latter view is espoused by the nonprofit Stop B2H Coalition, whose membership consists of 600 individuals—farmers, ranchers, environmentalists, wildlife protectionists, residents in five counties the line will cross and individuals intent on preserving the Oregon Trail. The grassroots opposition, based in La Grande, also has allies in organizations such as the Oregon-California Trails Association, Oregon Natural Desert Association, Oregon Wild, Greater Hells Canyon Council and WildLands Defense. 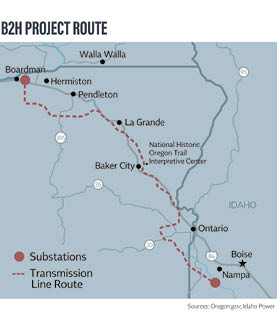 A quarter mile of the Oregon Trail runs through Larry Solitz’s property, a homestead owned by his wife’s family since 1917. “We have a piece of history here,” he said. “I think of all the people who walked through here. I think of their joy and their agony. If we lose this jewel so people can leave their lights on at night, well, it just doesn’t feel right.” He’d like to be, he said, “the stone that slays Goliath” in this underdog battle.

B2H is being proposed by two investor-owned utilities—Idaho Power and PacifiCorp (a Berkshire Hathaway Energy subsidiary)—and the Bonneville Power Administration. Idaho Power has taken the lead, saying the transmission line is necessary to meet growing demand for low-cost clean energy across the Pacific Northwest and Mountain West states like Idaho, Utah and Wyoming.

In the works for more than a decade, the $1 billion to $1.2 billion project will create a transmission line that carries 500 kilovolts, about twice the amount of electricity that runs through other high-voltage lines, and will feature towers as tall as 190 feet in some places. The project must win approval from state and federal agencies that either own land along the route or regulate development of new energy facilities. So far, Idaho Power and its partners are winning the regulatory battle, with the Oregon Department of Energy recommending approval of the proposed facility.

Fuji and Jim Kreider spearhead much of the opposition. They live in the Morgan Lake area in La Grande and, in the early phase of the project, noticed neighbors fighting neighbors over the proposed location of the power line. Once the locals came together, they agreed that no line was better than the least objectionable route. In the four years since launching Stop B2H, the couple has pored through thousands of documents, attended and testified at dozens of hearings, and created websites, fact sheets and lawn signs. Their goal is to stop the line from ever being built, but in the interim, they hope to delay construction until new technologies can make the proposed project obsolete.

The central question the opposition is asking is whether there’s truly a need for B2H. “The energy industry is being turned on its head,” Jim Kreider said. “It used to be that energy companies generated energy and sent it on a transmission and distribution network to our homes. Now energy generation using renewables and storage is becoming decentralized. Homeowners can add rooftop solar, industry can turn wasted steam and heat into energy, corporations can use energy from wind and solar farms, and entrepreneurs can generate and store energy cheaper than the utilities themselves. 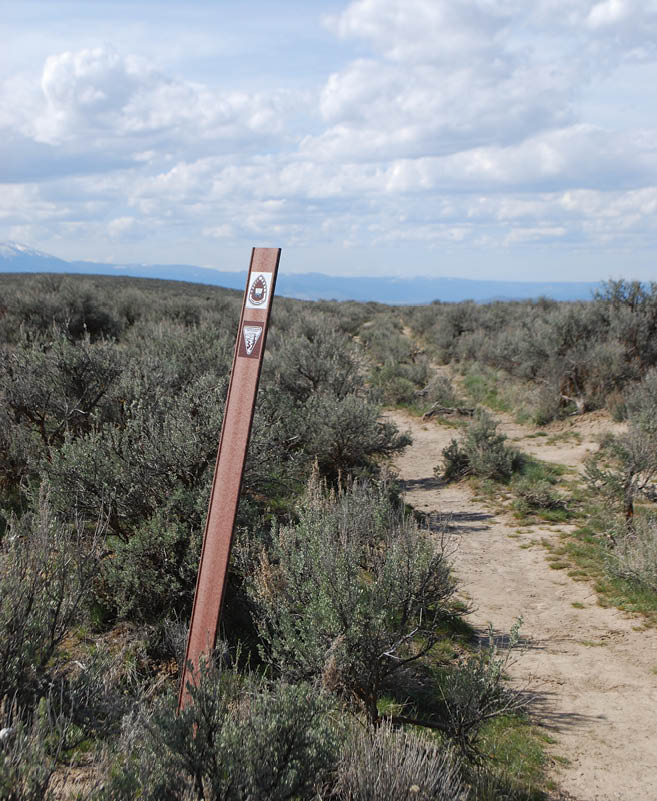 “These newer, disruptive technologies are game changers, significantly altering the way businesses and entire industries operate,” he said. “Energy can now be produced closer to where it is needed, eliminating the need for large, centralized transmission projects. Refurbishing and upgrading the current system would seem to be a more prudent investment than building a new line, especially in light of the utility-caused fires in California.”

In its analysis, Idaho Power considered many options to satisfy the growing need, including roof-top solar, reducing demand and energy efficiencies. Those measures could supplement B2H, and Idaho Power is willing to use them. But it says small-scale sources aren’t enough to outweigh the benefits of a 500-kilovolt transmission line.

Since Idaho Power began the B2H process twelve years ago, it has constantly analyzed whether B2H is the right project, according to spokesman Sven Berg. “We’ve looked at how many people are coming, what resources will meet that demand and what is the best option,” he said. “The resulting answer is always B2H.”

“We do see overall growth in electrical need for our customers, especially in Boise and the Treasure Valley,” said Jeff Maffuccio, the facility siting coordinator for Idaho Power. “We’re looking for a clean energy future and to tap into hydroelectric, wind and solar generation out of the Columbia River Gorge.”

He points to the abundance of solar power in the Southwest that can pour across transmission lines to warm homes in Portland and Seattle during peak winter months. The same lines could deliver surplus hydroelectric and wind power from the Northwest to cool homes in the Southwest and drive Southern Idaho’s irrigation pumps in summer months.

The power line’s proposed route crosses 100 miles of federal lands overseen by the Bureau of Land Management, U.S. Forest Service, Bureau of Reclamation and U.S. Department of Defense. The BLM granted Idaho Power a right-of-way across its lands in 2017. “The Boardman to Hemingway Project is a Trump Administration priority focusing on infrastructure needs that support America’s energy independence,” then-U.S. Secretary of the Interior Ryan Zinke said when the BLM approved the right-of-way. Since then, the other three agencies have either approved or are expected to rule in the project’s favor.

The remaining segments of B2H’s route include 190 miles of private land and 3 miles of state lands. Permission to build a line on those portions must be approved by Oregon’s Energy Facility Siting Council, which reviews every large energy facility proposed in the state. This council has jurisdiction over the entire project in Oregon, including federal lands, and is staffed by the Oregon Department of Energy.

In 2016, Idaho Power submitted some 17,000 pages of documentation that took ODOE staff a year to review. “B2H is bigger than most because of its size, scope and complexity,” said Kellen Tardaewether, ODOE’s senior siting analyst. “It crosses five counties, sage grouse and ground squirrel habitat, and the line parallels and is in view of the Oregon Trail.”

Tardaewether expects ODOE to issue the proposed order and notice of contested case by the end of the year or early 2020. Members of the public who directed their comments with “sufficient specificity” to the council’s standards will have the right to participate in the contested hearing phase. After the contested case process is complete, the council will make its final decision.

“One of our big complaints is that the process is extremely complicated,” Jim Kreider of Stop B2H said. “This works in the developer’s favor, (because it has) large staffs to comply with regulatory standards. As civilians, we don’t have the resources to argue if they don’t do a good job.”

CAN THE EFFECTS BE MITIGATED?

In response to the public’s concerns, Idaho Power has agreed to a number of techniques to mitigate visual impacts and other effects—narrowing right-of-way paths to a maximum width of 250 feet, lowering tower heights to 140 feet in some areas, altering the type of tower in front of the National Historic Oregon Trail Interpretive Center near Baker City, limiting the number of new roads and minimizing how many active creeks and streams the B2H crosses, especially those that are habitat for salmon and trout.

But mitigating damage to the Oregon Trail will be difficult. “Once the trail is gone, no mitigation will bring it back,” said Gail Carbiener of Bend, a member of the Oregon-California Trails Association. He’s particularly concerned about views in front of the Interpretive Center. He wants the line buried for about 2 miles and believes the increased cost is reasonable to protect both the Interpretive Center and the quality of life for Baker County residents. “Instead of seeing the view the emigrants saw, visitors will see a power line,” he said.

But Idaho Power’s Maffuccio argued burying the line would have a more significant impact on landowners than an overhead line and could also damage trail ruts. In addition, maintenance and repairs to an underground line are more difficult and expensive.

“We still have a lot of hurdles to go through before it’s a done deal, and there’s a lot of opportunity for public input,” he said. Idaho Power and PacifiCorp must win authorization from public utility commissions in Oregon and Idaho, and BPA must work through a National Environmental Policy Act process before it can issue a
final order.

So what happens next? If Idaho Power and its partners get all the necessary permits by 2021, the transmission line could be in service by 2026. Before construction begins, opponents will likely take their case to the Oregon Supreme Court. “I believe that’s the place where people like me and those worried about the Oregon Trail will get an impartial hearing,” Carbiener said.

If the utilities lose at the Supreme Court, Idaho Power says its plan B could be a natural gas plant in Idaho. “It only resolves our needs and not BPA or PacifiCorp needs,” Maffuccio said. “Natural gas is affordable today, but we don’t know what’s going to happen in five to ten years.”

Regardless of who prevails over B2H, all parties agree that renewable, clean power sources, plus new energy storage options, are the future. The remaining question is whether a large new transmission line will pass over a landscape of vast distances and the historic voices of pioneers who once passed that way.