Megan McGeorge’s idea was simply to play the piano on the street. Four summers ago, the musician persuaded the folks at Portland Piano Company to donate a piano. She and some friends pushed it five blocks to 13th Street and West Burnside, where McGeorge began playing it every Thursday afternoon. 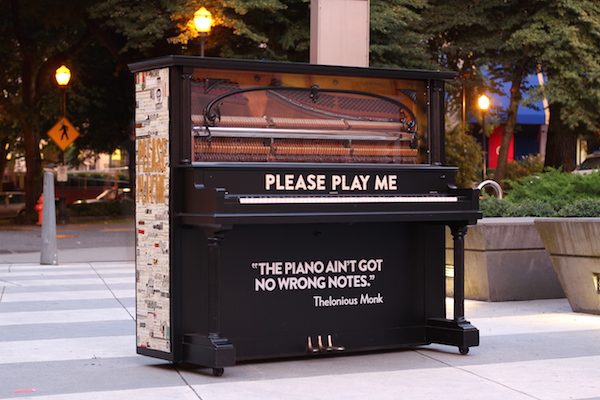 The 30-year-old professional musician rescues old pianos from local piano companies and puts them on the streets in summer months for the public and other professional musicians to play. At the end of the summer, she finds a permanent home for the pianos with artists, community centers, and schools and then starts anew with more donated pianos for the next summer.

To date, she has secured sixteen pianos—all inscribed with “Please Play Me”—and has rotated them around twenty-six public spaces. One piano resides at the Portland Art Museum courtyard in July and August. In the summer of 2015, the project invited designers to decorate eleven of the pianos and will do so again next year with a new crop of pianos, said Rob Bearden, director of operations for the Portland Art Museum. “Unlikely cultures collide there. It creates a moment when people stop and talk,” said Bearden, regarding the effect of the piano on the courtyard.

McGeorge, who graduated from Portland State University with a concentration in music and theater, has grown her idea into a year-round collaboration with artists, community and cultural organizations and pianists who perform free concerts. A CD of public performances is now available on the organization’s website, pianopushplay.com.

Among places where the public can now play indoors year-round are the World Forestry Center, The ADX community makers’ space, The Yards at Union Station, Marthas at Revolution Hall and, for this winter, The Armory.

Through January 10, musicians will play a “techpiano” in the lobby at the Oregon Museum of Science and Industry as part of its current “science of sound and music” exhibit. “The piano itself is actually an incredible machine,” explained McGeorge. The techpiano is a collaboration with CymaSpace and Lucid Design, which engineered a technology-enhanced piano experience. An LED screen above the keyboard converts the piano’s notes into color, light and movement. Stop playing the piano and “Play Me” appears on the screen.

The invitation to play and the public locations of the ubiquitous pianos have had a positive impact on Portland culture, according to McGeorge. “People are attracted to it,” she said. Graffiti and vandalism haven’t been issues.

McGeorge has received $16,000 in grant money and is seeking nonprofit status as opportunities continue to unfold. The Portland Marathon organizers invited Piano. Push. Play. to bring two pianos to last fall’s race. In a modern update, an app (pianopushplay) now directs the public to pianos. “I just want to continue making people excited about this instrument and sharing music,” said McGeorge. 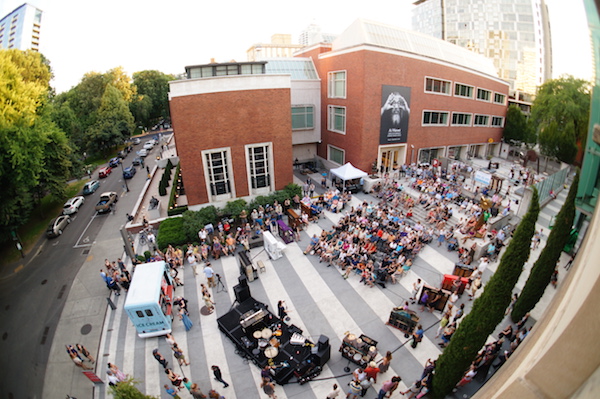