Look through an old family photo album or peruse a historical society or museum, and you’ll find eerie tintype photography of years ago. Using a Civil War-era photographic process to make one-of-a-kind portraits of his subjects, Jason Chinchen is harking back to those olden times. The images are created by applying a light-sensitive silver emulsion to a thin piece of metal and then exposing it in a camera and developing it. Chinchen’s business, Analogue Tintypes, travels to various pop-up events around Central Oregon making tintype portraits for the public, and makes portraits in private sittings as well. 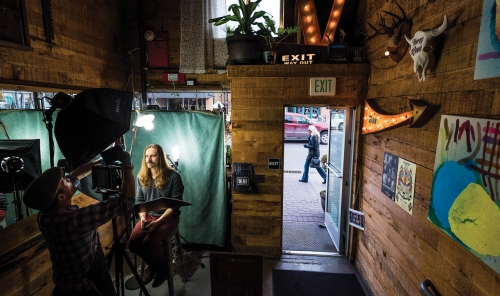 Jason Chinchen loads a 4x5 film holder containing a light-sensitive aluminum plate coated in collodion and silver nitrate while preparing to make a portrait of Arthur Tripp during a pop-up event at Velvet in Bend in March. “I haven’t sat for a portrait since my (high school) senior pictures. Much different experience,” Tripp said. 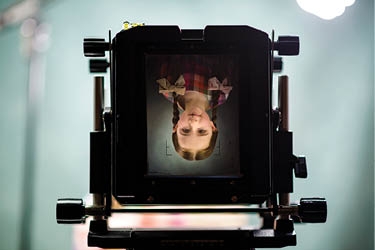 Five-year-old Astrid Petkun is seen on the glass on the back of Chinchen’s 4x5 camera. 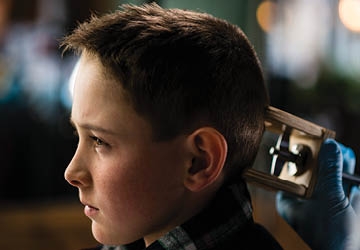 Photographers of the past and present doing tintype photography typically use a 4x5 or another large-format camera—tintypes are a one-of-a-kind direct positive process, so no negative is created for enlargement. 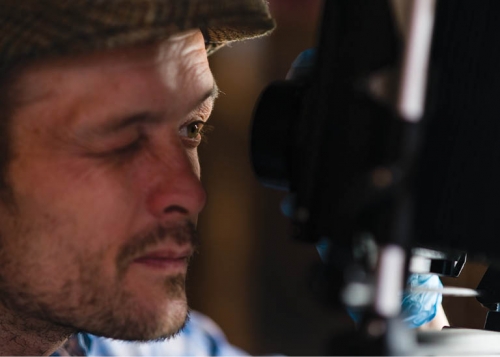 Chinchen uses a loupe to check focus on the back of his camera. 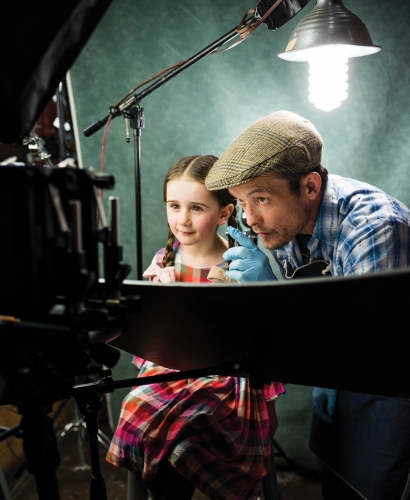 Chinchen instructs 5-year-old Astrid Petkun on the do’s and don’ts of sitting for a tintype portrait during his pop-up event at Velvet. Tintypes require a lot of light to expose properly. With the continuous light sources and lenses Chinchen uses, subjects need to sit still for an exposure lasting approximately twelve to eighteen seconds. Subjects can blink, but any other movement can result in a blurred image. 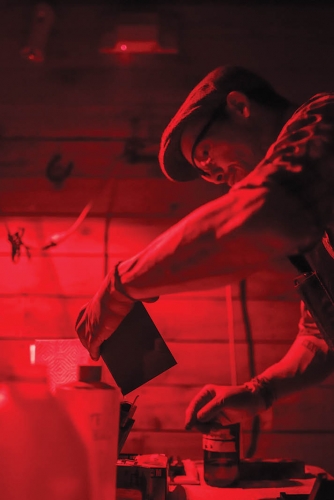 Chinchen removes a plate from a silver nitrate bath while working in a converted darkroom at his pop-up. He uses aluminum plates, which are first coated in a collodion solution, then placed in a silver nitrate bath for several minutes. This step makes the plate light-sensitive, so it must be loaded into a film holder and unloaded after exposure in the dark or in red darkroom lighting. The plate needs to stay wet for the entire process for it to remain light-sensitive, also referred to as wet-plate photography. This makes the process time-sensitive as well. 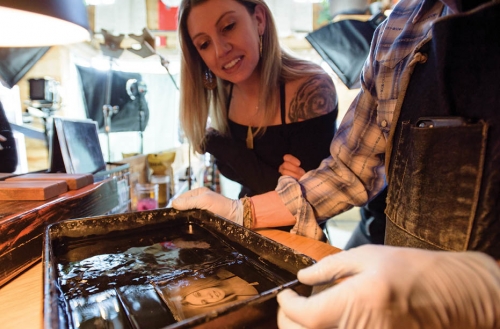 Kayla Ellsworth watches as her portrait becomes visible in the fixer. After the plate is finished in the fixer, it is rinsed and dried, and later a varnish is applied to protect the emulsion. 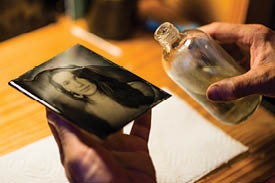 After heating a finished tintype plate over a flame, Chinchen pours a varnish over it. The varnish is then heated again to set and dry on the plate. 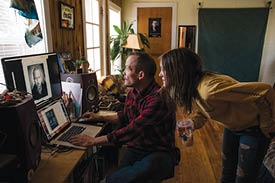 Chinchen and his daughter, Avery Chinchen, 14, look over a scanned tintype. Chinchen scans the finished tintypes and only keeps a digital copy of his work. “The originals aren’t as important to me as the people they belong to,” he said.