written by Isaac Peterson | photos and video by Laura Ross-Paul 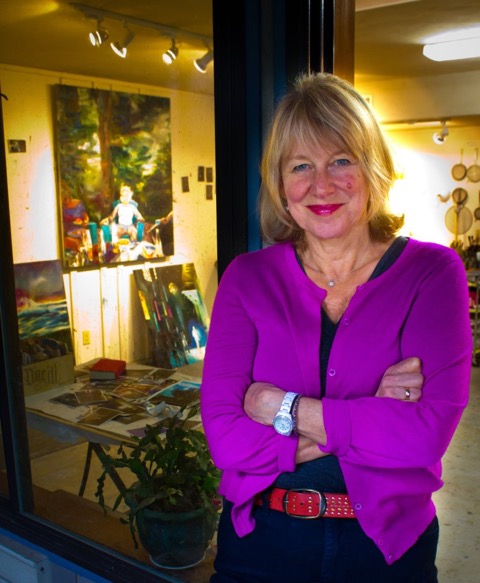 Laura Ross-Paul is a Portland-based artist known for her flowing, ephemeral oil paintings. Her canvases depict lone figures in awe of nature, appearing precarious and vulnerable—hinting at the works of Caspar David Friedrich or Claude Monet. The theme of the lone individual confronting the unknown is one inexorably tied to her personal story. In her latest show, Visual Code, she tells the story of her journey confronting breast cancer.

When she was only eighteen years old, she lost her mother to breast cancer, a catastrophe which catapulted her into adulthood. Young Laura Ross met her future husband Alex Paul at Oregon State University in 1968, where she was the political cartoonist for OSU’s underground dissident newspaper, the Scab Sheet. In the years since then, she has been a prolific artist, showing her work around the state and in galleries across the country. She’s won numerous awards for her art and has enjoyed a long career as a teacher at Portland State University, mentoring scores of up-and-coming artists.

As the turn of the millennium approached, her life and career were reaching a triumphant apogee. Her kids were all getting ready to leave for college and she was retiring from teaching to focus full-time on her painting. She would finally get to explore her full potential as an artist—a moment of personal victory, yet suddenly darkened by a shadow from her past.

On Valentine’s Day of 2003, Laura was diagnosed with breast cancer. In some way, the life she had created in the years since her mother’s death had been an escape from the destruction the disease had wrought all those years ago. And, now, the forces of nature were back to haunt her.

Luckily, she was diagnosed early. The tumors could be addressed surgically; the cancer was still localized and not systemic. Her prescribed mastectomy was standard practice—an experience tens of thousands of American women undergo every year. The operation was scheduled for six weeks later, on April 22nd.

But Laura and Alex couldn’t just wait. They were too restless and rebellious. Alex began to investigate, reading medical journals late into the night. Resources set aside to fund Laura’s art were redirected towards the investigation. They criss-crossed the country meeting doctors, trying to discover everything they could about breast cancer.

Alex’s research led to Dr. Peter Littrup at the Karmanos Cancer Institute in Detroit. Littrup was a specialist in treating prostate cancer using cryoablation, the use of extreme cold to destroy diseased tissue. Cryoablation was a medical standard in treating prostate cancer and cervical cancer, why couldn’t the technique be applied to breast cancer, too? In the time before the mastectomy, Laura could undertake cryoablation followed by an independent analysis. If the malignant cells survived, she could go forward with the mastectomy as planned.

The process wasn’t easy; Laura had to be constantly monitored for recurrence, including regular flights back to Detroit for specialized MRI screenings. Her Portland doctors resisted the experimental treatment, but now it’s been thirteen years since Laura’s diagnosis with no recurrence. Since then, Laura and Alex have become activists for breast cancer awareness and the cryoablation process. Laura, Alex, and Dr. Littrup wrote a book on their experience, They’re Mine and I’m Keeping Them. Laura is the first patient in the United States to receive cryoablation as treatment for breast cancer, but dozens of women have followed in her footsteps after hearing her story.

Today Laura Ross-Paul finds her life unfolding in ways she never could have predicted. Her circles continue to grow, and the energy of her artistic process seems to fuel her activism. Her journey through cancer has become the subject of her most recent body of work, Visual Code, which is on display at the North View Gallery at Portland Community College Sylvania in Portland. The opening reception is Saturday, November 12 from 2-5 p.m. with an artist’s talk on Tuesday, November 29 at 1 p.m.

Laura Ross-Paul is represented by Froelick Gallery in Portland and by Brian Marki in Palm Springs.

“My panel constellation might be read as interconnecting stations on a journey of discovery. For the last 13 years I’ve been on a real life journey moving from a Patient Pioneer, to a new-medical-technology Advocate to an International Speaker, traveling 4 times to China. Working closely with a foreign culture on a life and death type of project has affected the way I process creatively. My grouped panels interconnecting with each other to form a single constellation might be read as parts of my continuing journey.”