Dozens of ink bottles catch the sunlight that pours over Ursula Barton’s workbench. Each bottle spills from its mouth jade, ruby and sapphire—the colors of its contribution. Tabletops, windowsills and floors in her studio are splotched like a work of art in progress. A smattering of hued ink dries on the artist’s immense canvas paintings of iconic bridges covering the stark white studio walls. 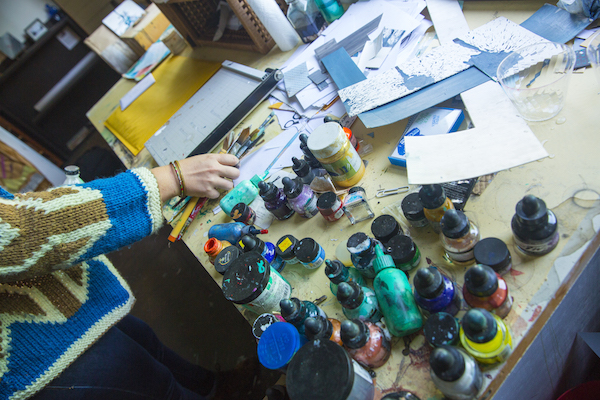 “Ink is not forgiving at all,” said Barton. “If you spill something, or if you make a wrong line, you can’t erase it. It’s just there, and then that creates a new problem for me to solve.”

These problems don’t seem insurmountable to the 28-year-old artist. After all, she’s made a career built on spilled ink.

When Barton was nearly broke in her early twenties, she spent her last $100 on indulgently expensive ink and watercolor paper in hopes of reigniting inspiration after a creative dry spell. She set up to paint, determined to create.

“I’m a bit of a slob, so there was stuff everywhere,” she recalled about her former studio. She laid the paper on the ground, spun around too quickly and sent most of the ink cascading across the paper and onto the floor. 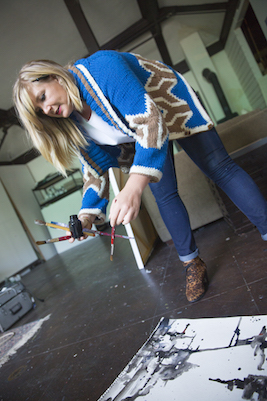 “For a moment, I was just horrified,” said Barton. “That was my last $100 that I was saving just for that moment.” In a panic, she began throwing water on the paper, allowing the pigment to delicately bleed across the pages and form bizarre shapes.

“I felt completely defeated afterward,” Barton recalled. “I decided that I needed to go across the street, get a drink and think about what just happened.” A few drinks in, she returned to the carnage.

The collection of Portland skyline images she had photographed on her daily commute from the city’s northeast side into the Pearl District caught her eye, and Barton decided to attempt integration. She began drawing buildings on top of the dried ink blobs.

This incident gave rise to her first three drip-works featuring the Steel Bridge, the Hawthorne Bridge and the Portland skyline. “It took that moment of spilling the ink and rolling with it,” Barton said. “That made me surrender.”

Until then, letting go was contrary to her disposition. While pursuing an illustration degree at Portland’s Pacific Northwest College of Art, she was a meticulous artist, controlled in her focus on figures and hands. The pinnacle of fine art, to Barton, was to create photorealistic drawings. She agonized over making flawless lines and shapes.

Then Barton started thinking back to her college job as a catering company bartender in downtown Portland. Working inside affluent homes had given Barton a firsthand look at the art people were buying. “Instead of figures and hands, they had landscapes and surreal pieces,” she said. “No one wants to look a painting in the eye.” 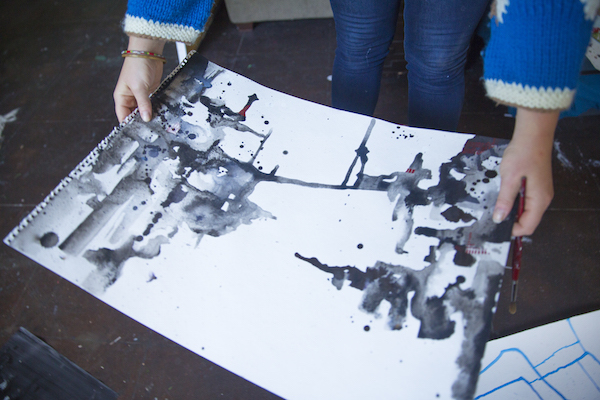 She began photographing her commute, tapping into her longstanding love affair with architectural patterns and hand drafting. Her interest grew toward structure and shapes. “It’s a nerdy excitement that happens when I notice visual patterns that are also there for structural integrity,” she said.

In all of her commute, she found Portland’s bridges to be most captivating. In turn, people are captivated by Barton’s Bridge City art. “I never thought to myself, ‘I’m going to be that bridge girl,’” Barton said, laughing. “I’m fascinated with the whole metaphor of humans deciding to build something to connect two worlds.” 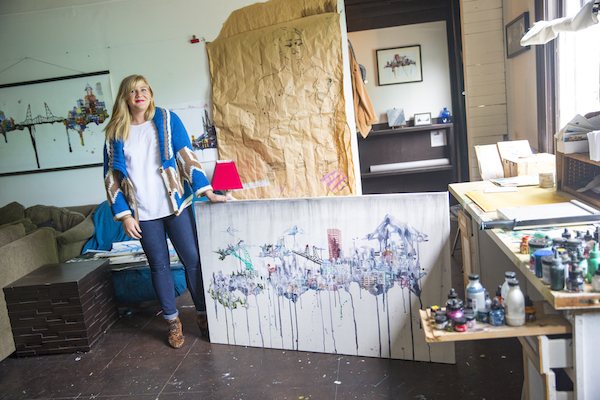 She now acknowledges that the initial ink spill inspired some of her favorite work. By accident, she was able to finally trust her skills and overcome the need for perfection. “I found it’s more rewarding if I have a dialogue instead of this intense challenge of making shading even or making sure every line is perfect,” said Barton. “I haven’t used an eraser in years. It’s liberating, for sure.”

Unlike many other artists and her former self, Barton doesn’t sketch before painting. “I like to create a problem for myself and solve it, then create another problem and solve it,” she said. “I freehand everything because I love messing up. It’s this awesome panic of, ‘I fucked up!’” 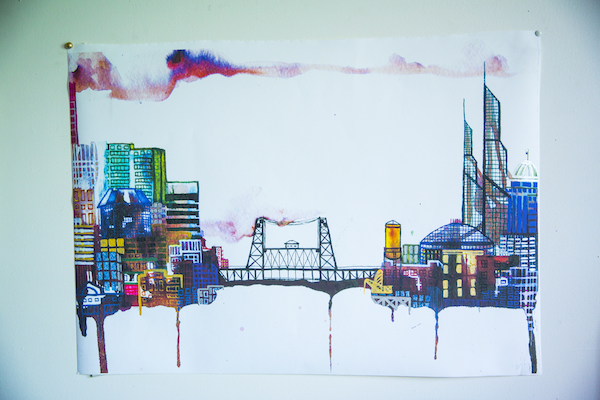