To one side of Gabriel Manca’s front door, a wood-framed canvas covers the entire wall, mixed media art protruding from it. Layers of found objects are covered in papier-mâché and held together by thousands of staples. “The ability to ready our minds for unique or original thought is a product of art education,” said Manca, from his home in Enterprise. “It’s a direct result of being encouraged creatively. Art is so rich in the formation of humans.”

Manca’s own formation began in John Day. The influence of art was all around him. His parents created art in a stained glass studio in the backyard. It was not unusual for family friends who were artists or musicians to drop by for dinner. When his hippie parents divorced, 12-year-old Manca moved to the Oregon Coast with his dad, where he grew up watching the contractor rehabilitate old buildings. When he visited his mother in Enterprise, her sense of space and décor left him in awe. 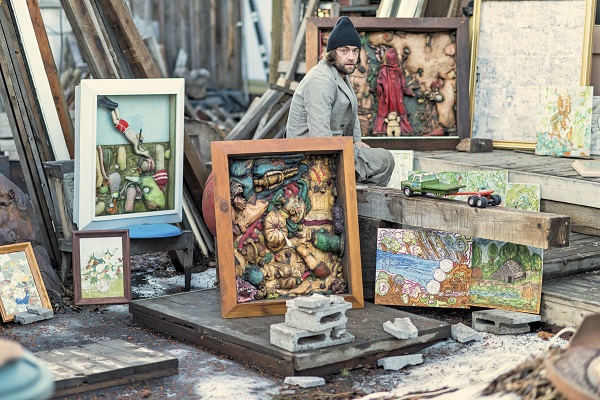 “I think I took the creativity around me for granted,” Manca, now 40, said. Though he was an artistic child, he also was captain of the football team and had various interests as a teenager. While Manca was attending Taft High School in Lincoln City in 1989, the emerging artist Patrick Abbey transferred to Taft for his junior year. Now a celebrated yet reclusive mixed media artist, Abbey became a major influence in Manca’s path toward lifelong artistry.

“He was four years older than me and unlike anything I’d ever seen in a human being. Just fearless in his art making,” recalled Manca. Abbey became Manca’s friend and ally as the two came of age in the art world. Abbey attended Pacific Northwest College of Art (PNCA) in Portland, and Manca followed suit in 1992, after graduating from high school. At just 21, Abbey landed a show at a prominent Portland galleryleading Manca to his first job in the arts. The Jamison Thomas Gallery was one of two major galleries in Portland at the time. Located in the run-down Pearl District, the folk craft gallery became William Jamison’s lens to focus on contemporary art in a global context. “[Jamison] was very concerned with sincerity in art, bringing in wild-ass idiosyncratic things,” said Manca. “There was a thread of honesty, and the Jamison Thomas Gallery became the premier place to show.” 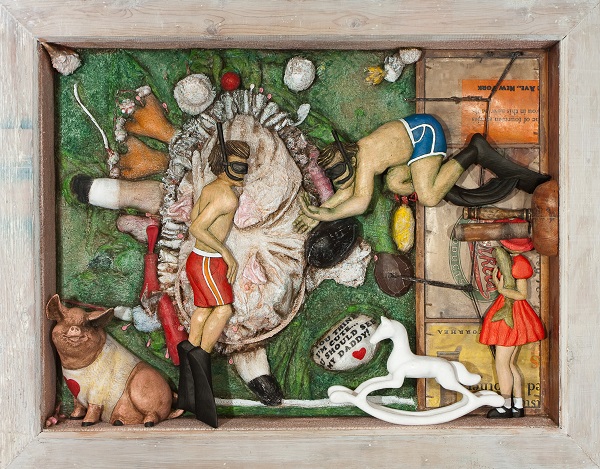 Manca came on board as an art handler for the last two years of the gallery’s run in the mid- 1990s. Jamison was dying, and often Manca’s job called for driving him to appointments or meetings with curators. Manca gleaned insight when Jamison offered it, and took notes in his role on the periphery of a buzzing art scene. “He made me feel like I had potential,” said Manca. “He encouraged the intangibles by putting me in proximity to artists and collectors, by just crating works or cleaning the floors. I got to pick up pieces and flip them over, see how artists sign their work. I was in the background during big meetings, and I got to see how personalities mesh in that world.” Manca eventually helped close the gallery, carefully assisting in the sorting of tens of thousand of works that artists had left in the care of Jamison.

Manca dropped out of PNCA before his thesis year to focus on art full time. Repurposing found objects, he began creating themes of decay and growth, ritual and family in collages, wood carvings and shadowboxes. His next phase was redactive, meaning Manca used an electric eraser tool and ink to reinvent thrift store canvases. His current preoccupation is creating sculpture out of found objects that naturally fit together without manipulation.

Early on, Manca made an impression in the art world, landing shows in prominent Northwest galleries, selling many pieces of his art and garnering press. With that came the harsh reality of art critics. “I had too many voices around me in Portland,” he recalled. “It was hard to hear my own voice.” One shrill voice for Manca was criticism that his work was “all over the place.” 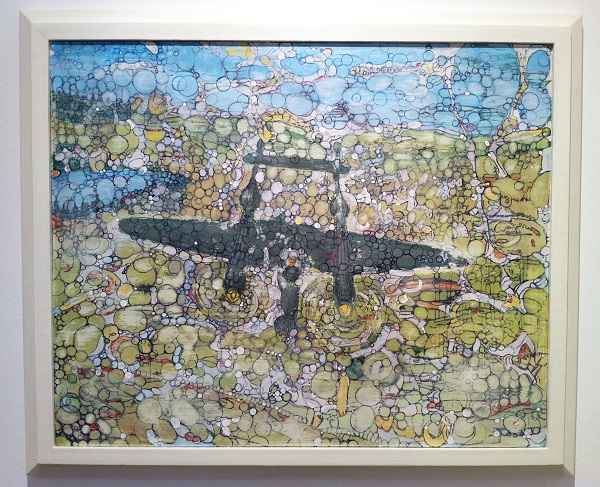 “My argument was that ‘multifaceted-ness’ is happening everywhere in the creative world. Our bodies and earth systems are all multimedia and multidisciplinary,” said Manca. “Culturally, especially now, if we don’t learn how to reinvent ourselves every five to ten years, we’ll be unemployable.”

He removed himself from the criticism and the scene, moving to Enterprise at age 28. “The quiet and ability to concentrate was here,” he said. “Sure enough, I’ve found that the destructive voices faded in Wallowa County, and the fine advice and wisdom I’d been given was lasting.” He developed a new support network in his adopted home. Owners of local ceramic artist residency, the LH Project, gave him a job, in addition to encouraging his art. Owners of Wild Carrot Herbals, a body product company based in Enterprise, hired him to facilitate art displays in their storefront. 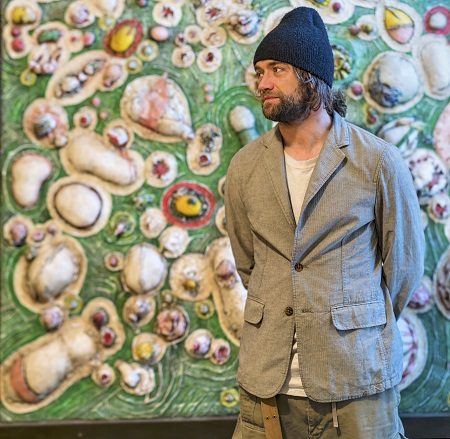 Even while living on his compound-like property in Enterprise, with his two daughters and a chaotic torrent of found objects-in-waiting, opportunities in the art world continue to find Manca. He has had a number of wellreceived shows and art sales through Froelick Gallery in Portland. This spring, he will take on the role of teacher and collaborator as an artist in residence at Caldera, the arts education program in Sisters. “The greatest thing one could ask for in a discipline is that it inspires learning,” he said. “Art enhances everything we do.”