DESIGN TRENDS COME AND GO, and in no room is that more apparent than the bathroom. Whether you’re remodeling or building new, the endless choices for materials and fixtures can be overwhelming. Regardless of whether you’re springing for a new master retreat or sprucing up the family bath, the question is how to create a bathroom that will still look fresh years from now. Four Oregon designers show us how it’s done.

ARCHITECTS DAREN DOSS AND LISA CHADBOURNE had their work cut out for them after they bought a historic industrial fishing complex in Astoria several years ago. The story they heard about the 1903 net shed— the building where fisherman stored and repaired their nets—was that buckets were the only bathrooms. In their efforts to adapt the waterfront property for residential use, Doss and Chadbourne mightily improved that situation. Today, the net shed hosts a home event space, complete with a wood-burning hot tub, a small kitchen and a small bathroom that complements the building’s storied past.

From the outset, the couple knew that they wanted to honor the marine industrial environment but allow for updates. As they stood in the net shed discussing the future bathroom’s design, they were inspired by the board and batten siding on the building’s exterior and the sunlight that fell through the cracks. They reinterpreted this treatment for the bathroom’s exterior walls by covering them with reclaimed Douglas fir decking and spacing the boards so that light can pass through. Translucent fiberglass encases the three interior walls. This allows for privacy and produces an aqueous light inside. To finish the room, durable aluminum plate covers the floor and back wall, and also forms the sink and counter.

Since the building is situated on pilings over the water, the couple cut a “riverlight” in the floor and installed thick plexiglass. The bathroom’s inhabitants can now get a clear view to the Columbia River below. At night, patrons of the bathroom can see fish in the river below. “It’s the biggest crowd pleaser,” says Doss.

CLASSIC WITH A TWIST IN PORTLAND

In old Portland neighborhoods, it’s not unusual for the large Foursquare-styles to be rich in square footage, yet scarce when it comes to the number of bathrooms. In 2011, the owner of such a house opted for a much-needed update when she converted 162-square-feet of a seldom-used sleeping porch into the house’s second bathroom. With windows along two walls, the layout of the new master bath would prove tricky. 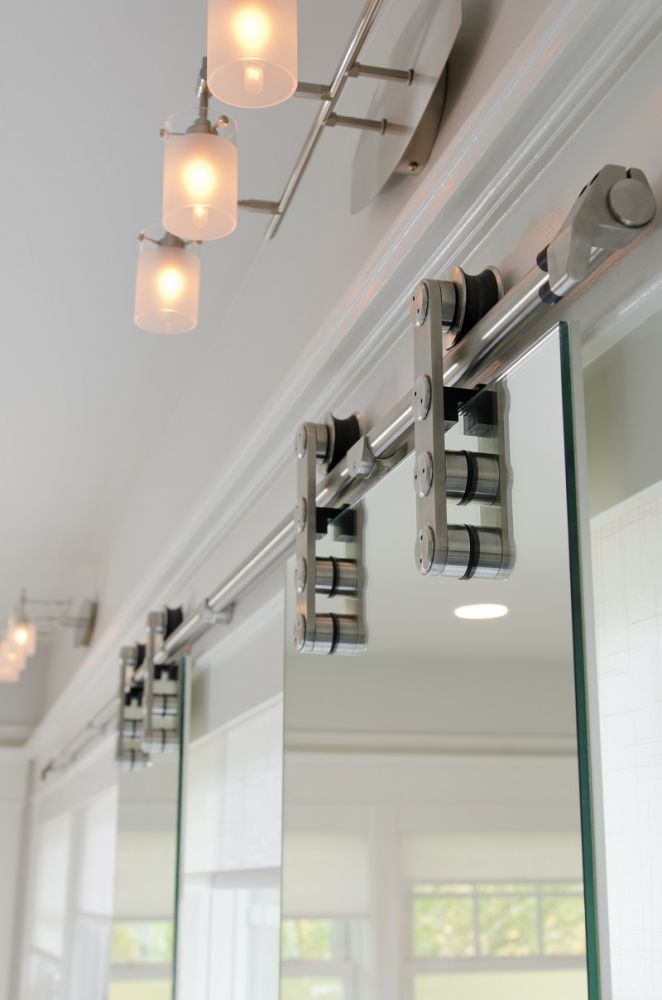 In order to maintain the historical integrity of the house and save the windows, architect Daryl Rantis of Green Hammer embraced the challenge they presented. First, he kept an existing builtin chest of drawers along one wall to provide ample storage. Then he banked double sinks along the second wall and designed the vanity to look like a piece of furniture. This solution ultimately required a stylish fix for the placement of the mirrors.

Inspired by sliding shoji screens, Rantis had Green Hammer craftsman fabricate hardware that allows the unframed mirrors to slide across the windows as needed. The hardware’s chunky lines provide a pleasing contrast to the bathroom’s more traditional details—the marble-clad shower, classic cabinetry and casework. Similarly, Rantis paired a geometric towel warmer with the sink. “Both were an opportunity for the functional to become ornamentation,” he says. Today, the new bathroom looks like it originated with the house and, thanks to the salvaged windows, bathes its owner in welcoming light every morning.

The 1905 farmhouse in Portland’s Mt. Tabor neighborhood had been subjected to many years—and eras—of renovations before Charlotte Cooney and Kevin Fischer of Alice Design/ Domestic Arts were asked to intervene. The home’s newest owners bought the house in 2012, had just had a baby and needed a family bathroom upstairs alongside the three bedrooms. The space allotted to this renovation was challenging. At eighty square feet, the walls had dark oxidized fir and nook-like sloped ceilings. Cooney and Fischer sought to build on the house’s quirks by combining vintage and modern pieces that would make the new space look like it had evolved with the house.

They began by adding old-school white penny tile to the floor and lining the shower with modern, elongated subway tile arranged in a classic offset brick pattern. White-washed pine paneling maintains the lightness while bringing in warmth and texture. Modern touches, such as the glass shower walls and squared pedestal sink, enhance the smaller footprint. Freestanding pieces, such as the clawfoot tub salvaged from Hippo Hardware and a mint-green storage cabinet picked up from Craigslist, precisely fit the room’s proportions and added further vintage character.

Small details throughout the bathroom reveal the owners’ personality. A wall alcove by the commode houses fun “trash” novels. A trashcan by the sink has a face drawn on its lid. The end result is a timeless bathroom retreat that evokes the charm of the old house and its new owners.

When a couple in Tumalo decided to build their new home on ten acres of old growth juniper in Central Oregon in 2005, they knew exactly what they wanted for the ensuite master bathroom. Inspired by extensive travels through Europe, they sought an airy yet streamlined space. Eric Meglasson of Pique Collaborative delivered just that— maximizing the 110 square feet to thoughtfully balance the room’s private functions with the couple’s desire for openness.

Meglasson started with the soaking tub, capitalizing on the property’s seclusion and serene views by placing it in a corner wrapped with floor-to-ceiling windows. The tub, and nearby shower and toilet, were then enclosed in frosted glass walls, to create a cube that neatly lends privacy without compromising the natural light and spaciousness. The challenge with using a semi-transparent material like glass, says Meglasson, is the tasteful concealment of plumbing. This was resolved by fabricating a cement “shower tower” to host the showerhead, stained to match the black concrete floors, and a white corrugated plastic template to hide the back of the toilet.. The room’s classic color scheme, dark espresso tones and warm white, runs all through the house, and is captured again in the bath’s floating double vanity. Modern faucets and sleek cabinet hardware maintain a clean look.

The overall effect is that of the structure fading away while nature becomes the foreground. “If it’s snowing outside, you’ll have snow falling down on two sides of you while you’re in the shower,” says Meglasson. “It’s quite the experience.”