Unwrap a peppermint, brush your teeth, or stick a piece of gum into your mouth, and chances are you’re getting a little taste of Oregon.

The Northwest is peppermint royalty in America. Oregon is second only to Washington, and the Beaver State grows three million pounds (or thirty-five percent) of the total domestic crop. 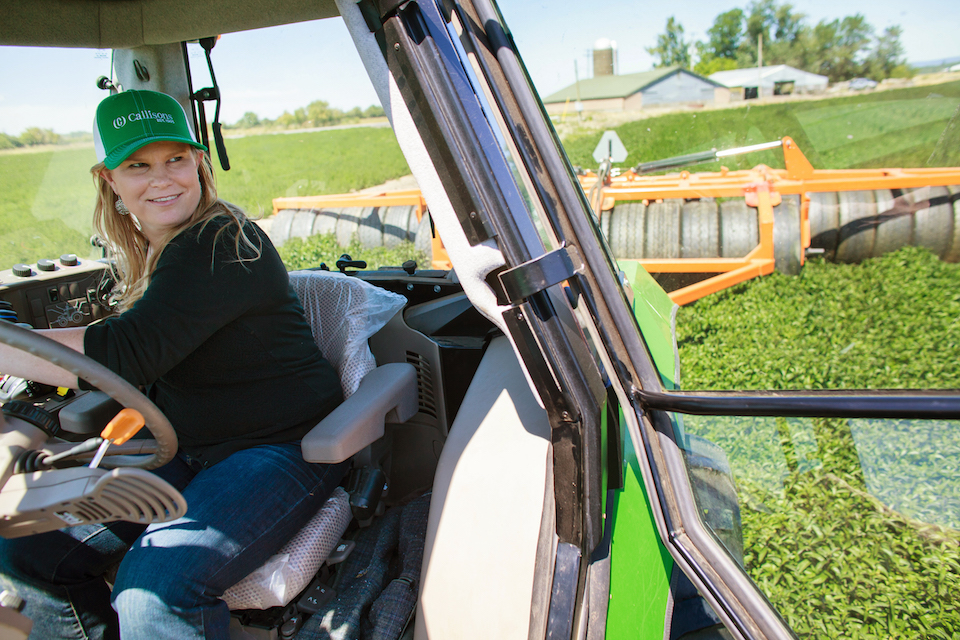 In Oregon, one of the largest single producers is Whitehead Farms. Macey Wessels and her family grow commodity crops—grass seed, wheat, sugar beets, hazelnuts and corn—in the vast open space around Scio. “Mint is hands down my favorite crop,” Wessels said. She’s known as the mint queen among her friends and on Twitter, where she shares stories about farm life in the peppermint industry.

Peppermint starts out as a rhizome that spreads rapidly underground. Dig in one acre of rhizomes, Wessels said, and you’ll end up with ten acres of plants. The leaves become the deep color of evergreen trees, so the plants stand out among fields of ryegrass and brown earth.

As she examined one of her fields from the cab of her blue GMC pickup truck, she said, “See how it has that reddish tint? It’s hungry right now. And the heat hasn’t hit the ground yet. It’s a funny plant that way. It definitely tells you what it needs.”

Mint is harvested during the heat of the summer because that’s when the leaves contain the most oil. Wessels uses a machine called a swather to chop off the stalks and spread them on the ground. Once the stalks are dry, they’re gathered and put into tubs, which resemble small yellow camping trailers.

The most effective way to get oil from the leaves is to distill it. The process is similar to making whiskey, Wessels explained. Hot steam pumped into the tubs cooks the mint. The resulting vapor is sucked through a tube and into stills. As it cools, the oil separates from the water and rises to the top of the container. The water is poured off and a potent, clear or pale yellow liquid remains. (The leftover mint can be used as compost that’s prized by gardeners.) 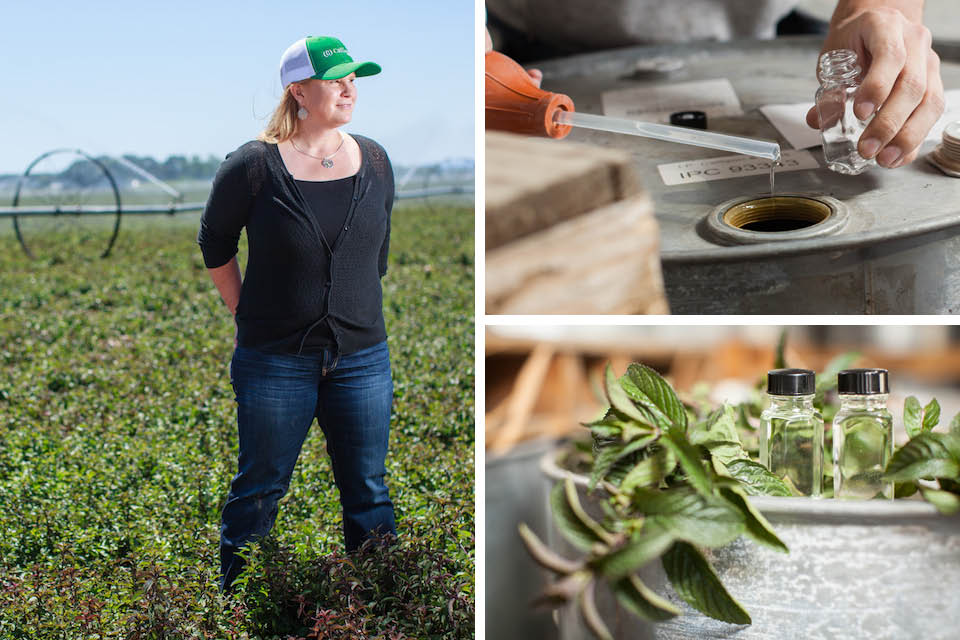 The oil is stored in fifty-gallon drums. Once the year’s harvest is finished, Wessels and her family will draw a sample from each drum and send it to a distributor in Washington. They employ flavorists whose job is to grade peppermint oil based on its smell. Once the oil has been graded, the distributor buys it and ships it to companies that make consumer products, such as toothpaste, gum and candy.

“Willamette Valley mint has historically been known for its really high quality, so we always thought there would be high demand,” Wessels said, as she drove back to the farm. There’s now a synthetic mint oil that’s driving down demand and prices. She said that the industry has also come under criticism for its use of pesticides to control weeds. She and her colleagues always minimize chemical use and engage in other farming best practices. They have more to lose than anyone if the quality of land, water or beneficial organisms decline.

“We really care about what we do, and we want to do it for generations,” she said. “Everything we do is to take care of the land.” Mint grown in the Willamette Valley is used mainly for peppermint oil, explained Bryan Ostlund, with the Oregon Mint Commission. But there’s also a thriving industry near Madras in Central Oregon and LaGrande in Eastern Oregon. Those leaves are more commonly used for tea and a chewing tobacco alternative. “They’re the same plants, but each growing area has some uniqueness to it,” Ostlund said. “The Central Oregon area has been good for the leaf industry.”

Mint on the Table

One of the classic ways to use fresh peppermint is to muddle it in a mojito. Catalina Acuña, chef and co-owner of Las Primas Peruvian Kitchen in Portland, puts a fun twist on her version by using pisco, a clear liquor made from grapes.

Jeremy Buck, chef and owner of South Bend Bistro in Sunriver, developed the recipe for farro mint salad with salmon for his wife. “She was looking for a healthy entrée salad that was good for warm weather,” he said. “The salmon can be served cold, but I prefer to light some charcoal and grill it right before eating. The dish goes well with any white wine and is a perfect match with a rosé or rosado.”

Chocolate mint cake doughnuts with ganache, shared by Stephanie Maier of Just a Dash Cakes in Beaverton, calls for chopped mint leaves in the batter and frosting. “I’m a huge fan of using fresh mint,” she said. “I prefer the flavor to extract. My best tip for this recipe is to make sure you lick the ganache bowl clean.”