During his forty-year tenure at Boora Architects, former principle Stan Boles designed a number of striking modern beach houses along the Oregon Coast—most recently, the 360 House, a glass and steel home with virtually 360-degree views. 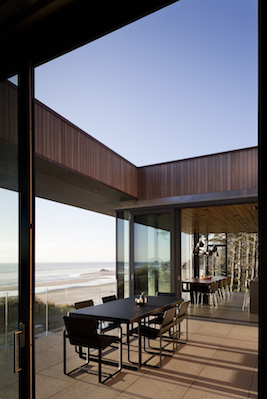 What were the challenges with the 360 House?

The client purchased the piece of property fairly impetuously. He just fell in love with the view and the forested site. As we started working on the project, we found that it was a very complicated site to build on. There were all kinds of zoning restrictions. There was a road easement that had to be preserved, as well as a one-story height restriction and coastal setbacks. It was basically an unbuildable lot. It took us more than two years until we got an agreement that there could even be a house there. Even then, it was very restrictive.

How did the constraints affect the design?

The house could only have a certain rectangular footprint. They basically drew a line on the ground designating where it could be. The design emerged as a raised rectangle. Almost like we were taking the forest floor and levitating it atop a glass prism. By making that cut and working with the topography, we created a two-story house as opposed to a onestory house. So the house becomes this totally transparent two-story prism that supports a green roof, which we planted with ferns and beach grasses.

What does the 360 reference?

The exterior is glass with a steel frame construction. Since we wanted all glass, we went to a curtain wall construction so that there was minimal interruption of the view. Hence the name of the house: from inside you feel as though you have a 360-degree view outside.

Tell me about the deck placement.

In the summer, when you can enjoy being in the sun on the Oregon Coast, you’re often uncomfortable because of the wind. Unless you’re sheltered, it’s just really hard to enjoy being outside or eating outside. The deck was positioned to be an extension of the living and kitchen areas and also to be sheltered from the wind.

How did the landscape influence the interior?

The floors are gray basalt tile that match the rocks on the beach beyond. We did the floor in stone so that it would stand up to the sand, dirt and grit that gets trackedinto a beach house. Then we put custom white oak boards on the ceiling plane to complement the 100-year-old trees outside. This creates a continuity of materials from the inside to the outside. We wanted everything to be very muted and soft. That way, when you’re inside the house, your eye goes to the view and the experience of nature.