“POWDER ROOMS ARE an opportunity to do something a little more glam, a little more fun and just experiment,” said Jenny Baines, the principle interior designer at Jenny Baines Interiors in Portland. Here, she tells us how the design for a powder room in a historical Lake Oswego cottage evolved, with planning and a dash of serendipitous finds. 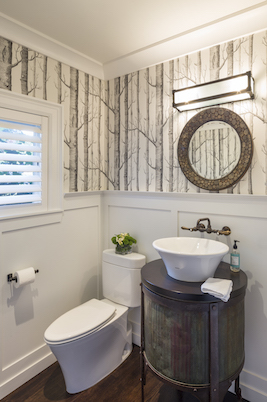 How did you approach the design for this space?

We always like to mix antique pieces with more contemporary pieces. So the vanity here is actually a vintage washing machine.

Yeah, we found it at an architectural salvage place on the East Coast and used it as the centerpiece. The countertop is a thick chunk of walnut that we put over top. Then we chose the wallpaper. We knew we wanted something graphic, but also simple and modern. Since we’re in Oregon, I think the tree motif really works.

Then you repeated that motif with the mirror.

The mirror was the last piece that we found. We were having a hard time finding one until we saw this. The mirror is made up of cross-sections of tree branches. So it’s just an abstraction of the wallpaper pattern. There’s a mix of elements here, including traditional, industrial and rustic.

How do you integrate them?

When I design a house, I think of it holistically. For instance, a lot of the details that we incorporated here, such as the casing and the millwork, are details that we used throughout the house. Then, by keeping a white canvas, here which is the millwork, we can showcase that industrial element. I always think of design in terms of contrast, in terms of light and dark or new and old. I think that helps to highlight the different elements in the space.

What do people get wrong when they design a space like this for themselves?

I think that sometimes people are afraid they can’t go bold with small spaces. But you can actually do something bolder than you would in a larger space. That said, I think you need to be mindful of the tone that you set throughout the house. For instance, in this powder room we continued elements from the rest of the house, such as the woodworking details and plumbing fixtures. So, while it is a departure, it’s still a continuation of what exists in the rest of the space.