Oregon’s natural beauty is hard to resist. Just ask architect Erez Russo. “I’ve been all around the world but wound up in Portland because I fell in love with how big nature is here,” Russo said. He set up shop fourteen years ago to specialize in “organic modern architecture,” an approach that brings that natural beauty indoors. Recently, he remodeled a “Rummer,” so-named for its builder, Robert Rummer. Rummer erected around 1,000 houses in West Portland and the surrounding counties from 1960 through the ’70s. He was an early adopter of the outside in aesthetic. Today, his homes are considered local Mid-century icons. Russo explains what made a Rummer home special, as well as the small moves that make this one sing. 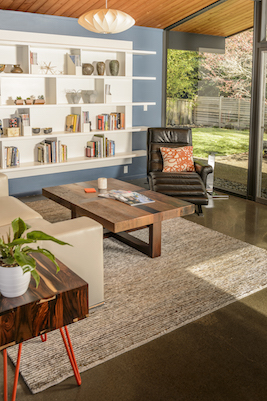 What made a Rummer home different?

A Rummer home is a post and beam home rather than a traditionally framed home. Traditionally framed homes have punched openings. It doesn’t matter how you decorate the outside of the wall, whether that’s Craftsman, Victorian, et cetera. They are all going to have walls with windows that are cut into them. The idea behind the Rummer homes, and more modern homes in general, is that you don’t have walls.

Why are people drawn to Rummers today?

We’re drawn to them because they feel very spacious. You have a connection to nature. You don’t feel locked in, or hedged in, because no matter where you look, there are multiple framed views.

What did you do for this home?

The owners asked me to highlight the details of the Rummer that were already there. We paid attention to how the ceilings, wood beams, and walls come together. The wood ceiling is a major element in the design that ties the exterior to the interior. When the ceiling hits the wall, it has to be very clean and minimal. This contributes to the feeling that the ceiling is continuous while the walls float below them. We also created floating bookshelves and media consoles. The idea being that everything floats off the walls instead of coming down to the ground.