In this house, the formality of a traditional enclosed entryway is a thing of the past. Step inside the front door and you’re greeted with an immediate view out the back—a 12-foot-high wall of glass that frames a grove of Ponderosa pine trees, desert scrub brush and several Cascade peaks in the distance. Putting that view upfront was a priority for Anne Mastalir.

When Mastalir and her family relocated to Central Oregon from Portland in 2013, the move was an opportunity for the interior designer and owner of Pringle Design to craft a house that was not only a calling card for her work, but an ode to her new home. “It was important to us to design and build a home that fit in well with the surrounding landscape and fit the Bend environment,” Mastalir said.

I figured out a very long time ago that nearly everybody I work with comes to Central Oregon, or has chosen to stay in Central Oregon, because they love the outdoors —Eric Meglasson, architect 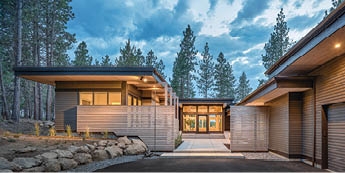 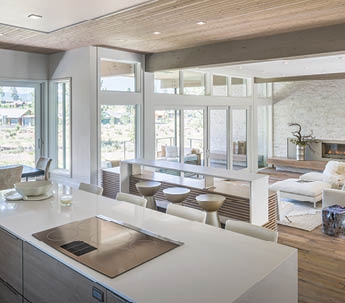 Contemporary finishes mix with a wide-plank oak floor in the kitchen. 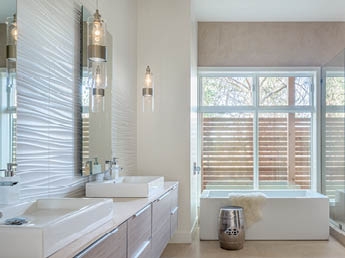 Finding a half-acre lot in Tetherow populated with mature trees and mountain views set the project in motion. Teaming up with architect Eric Meglasson, as well as High Timber Construction, was a natural next step. “One thing that we really like about [Meglasson] is that his architecture successfully draws a strong connection between the interior and the exterior of the homes that he designs,” Mastalir said. “That was important to us.”

If there’s a common thread through Meglasson’s projects, it is that love of the local landscape. Meglasson grew up in Bend and has designed homes there for twenty years, first as a director at Pique Collaborative and now heading up his own practice. “I figured out a very long time ago that nearly everybody I work with comes to Central Oregon, or has chosen to stay in Central Oregon, because they love the outdoors,” Meglasson said. “It’s all about that connection with nature.”

Meglasson describes his work as “high desert modern,” sometimes “abstract,” and he likes how such design can be manipulated to respond to the special topography and climate of the region. “We’re not really a mountain town, in my opinion. Yes, there’s mountains 20 miles to the west of us, but we’re also on the edge of a desert. To me, if you think about what belongs in a desert, it’s not log cabins,” Meglasson said. He advocates instead for architecture that can “straddle the edge between mountains and desert,” meaning the buildings can withstand weather extremes, from piles of snow in the winter to blazing sun in the summer, and still deliver that much sought after indoor-outdoor connection.

For Mastalir’s house, Meglasson drew on iconic Mid-century modern forms, such as what’s found in the design mecca of Palm Springs. There, features like exposed post-and-beam systems, floor-to-ceiling glass, and flat roofs proliferate, all of which were employed here. Deep roof overhangs keep the sun out of the building in the summer, but also protect the façade from water and snow in the winter. Copious insulated glass unites the home with the site. Contrary to popular perception, many flat roofs aren’t flat—they have a low slope and aren’t necessarily a no-go with intense snow loads. “Nearly every building in downtown Bend is a flat-roof situation,” Meglasson said. “They clearly work, they just need to be engineered properly.”

Meglasson and Mastalir organized the 3,300-square-foot floorplan into three sections, each at its own elevation, which lets the house follow the contours of the land. At the center is the entry and great room area. Above that, there’s a bedroom-bathroom unit that’s connected to the house, but also has its own separate entry, so it can be used as an office or guest suite. A private wing containing bedrooms is situated a few steps below the main living spaces.

Meglasson tucked protected outdoor spaces around the perimeter that can be used during different seasons or times of day, and are accessible from different rooms in the house, making the indoor-outdoor connection fluid. The biggest challenge was ensuring privacy from the street and neighbors while encouraging natural light and views. To do so, he detailed a system of cedar slat screens in strategic spots. The screens echo the exterior cedar lap siding, step up or down in height as needed, and enable bathrooms to receive full-height glass at a tub or in the shower, as the screens provide both privacy and peeks into the treetops.

Mastalir outfitted the interior based on how she wanted the house to feel. “[She’s] not just thinking about what materials are beautiful or are currently in vogue,” Meglasson said. Her goal was to juxtapose the modern bones with a palette that was, above all else, warm and inviting. The key to that approach was introducing subtle texture via natural materials. “A lot of very contemporary homes can lack texture and that can be challenging to some people,” Meglasson said.

Mastalir’s first pick was the wide-plank oak flooring that runs everywhere but the kids’ rooms. “It has knots and fissures in it and tremendous warmth, yet a lot of people might think something like that wouldn’t necessarily fit in a modern home,” Mastalir said. To create balance, she wove in contemporary touches, such as with Euro-style frameless laminate kitchen cabinets crafted by local maker Harvest Moon Woodworks. In the master bath, old-world limestone flooring and counters meet an artful wall of porcelain tile.

Certain finishes flow from inside to out, creating continuity and tricking the eye into blending the indoor and outdoor spaces. The great room’s fireplace wall and the adjacent exterior wall are clad in white quartzite ledge stone. A floating interior hearth of rift-cut oak is repeated outside in a bench composed of the same wood. Tight-knot cedar at the ceiling continues under the eaves.

When the project wrapped, Mastalir moved her family in and quickly gained an appreciation for how the house captures its high desert muse. “We wanted to design a modern home that pushed the boundaries of high design and was unique in terms of the architecture,” Mastalir said. “Not a stark modern home, but rather fused with rustic character, to really make it truly Bend.”