There are two types of prospective homebuyers: those who search for the house of their dreams, and those who create it. After spending years passionately remodeling her first home with recycled and salvaged materials—with the help of close friend and designer, Anne De Wolf of Arciform— Nancy Ranchel can confidently claim a place in the latter camp. 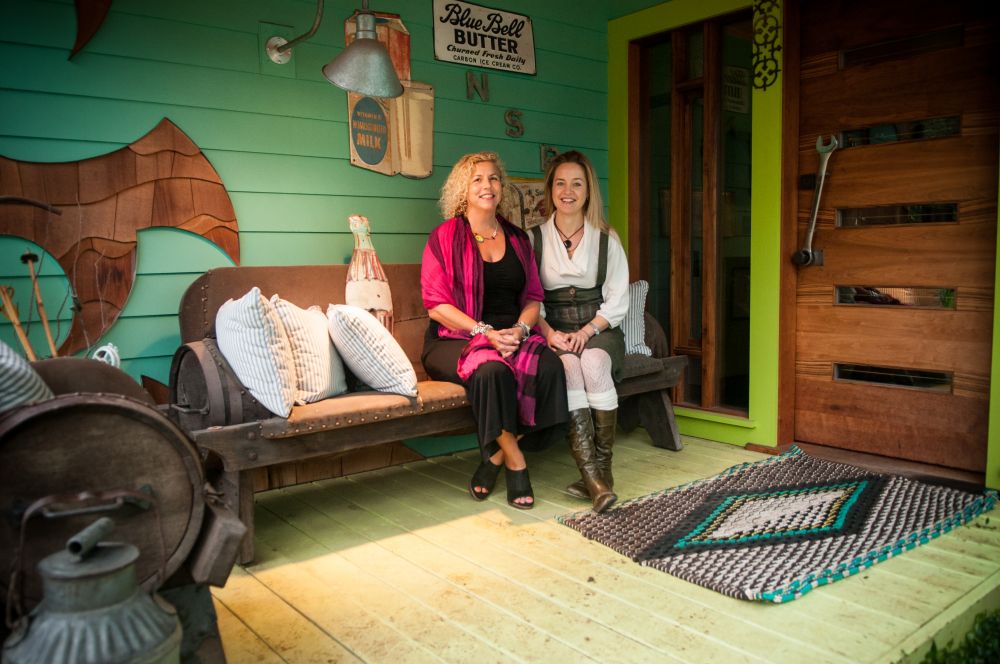 It was a warm August day in 1992 when Nancy Ranchel’s mother arrived at her daughter’s apartment to take her house shopping. At the time, Ranchel was “just a kid” in her mid-twenties and thought that she couldn’t afford to buy a house. But she hopped in the car and humored her mom anyway. As the two women walked through a 1978 house in the Markham neighborhood in Portland, Ranchel wasn’t impressed until they stepped out onto the back deck. At 1,500 square feet, the deck was almost as big as the house and overlooked a spacious lot surrounded by trees. Standing there, Ranchel thought: “Yes.” So she figured out a way to buy the view and the nondescript house that came with it.

Like many new homeowners, Ranchel’s earliest decisions about her loft-style house dealt with paint colors and little else. The open floor plan was intimidating at first, because design choices for one room could easily affect the next. Luckily she had her notebook. Pale green and spiral bound, the notebook’s pages overflowed with magazine pictures, newspaper stories and handwritten notes—any image or idea that caught Ranchel’s imagination, she tucked inside to germinate. In 1994, Ranchel also met designer Anne De Wolf, who was still in design school. The two women hit it off immediately, and Ranchel had found the perfect partner with whom to discuss her design ideas.

One day in 2000, De Wolf called Ranchel to tell her about some old wood she had recovered from an attic renovation. An avid recycler and lover of old things, Ranchel was intrigued, so she and DeWolf installed the wood in the first-floor guest room. This was the spark that Ranchel needed. Afterward, she says, “I just started tackling the house, little by little.”

Next, Ranchel and De Wolf addressed a prominent feature wall in the living room. It was two-stories of knotty pine veneer and garishly patterned brown tile, with a wood stove propped in front. “It was nasty,” Ranchel remembers. De Wolf suggested replacing the veneer with large sustainably harvested cherry panels. Upon its completion, Ranchel decided everything in her house should be just as beautiful and unusual. “It was an epiphany I had,” she says. “I don’t want anything regular.”

Since then, the friends have collaborated to renovate almost every room of the 1,850-square-foot house, using salvaged or sustainable materials as much as possible. Their creative process is fluid. “When Nancy and I design, it’s a very quick process,” says De Wolf. “She wants to consider everything. Nothing is a bad idea, but she knows what she likes.”

By 2002, Ranchel had so many ideas coming out of her notebook that her kitchen cabinets were plastered with magazine pictures. When she started to remodel in earnest, she was no longer intimidated by the decisions she had to make. For the first floor, she chose repurposed wood from pickle barrels for the flooring. The galley kitchen was reshaped using a salvaged steel I-beam along the ceiling to define its new square footprint. In the dining room, the two replaced the sagging pine veneer and mirrored tile ceiling with panels of sheet metal. The metal oxidized almost immediately, its warm rust color meshing with the cherry wood of the feature wall. In the downstairs bathroom, they dropped a sink basin into an antique sideboard. The original hollow core door did not open easily into the small space, so they put a salvaged wood door—one saved from a fire and still showing the burn marks—on barn door castors. They exchanged the charred screen with shiny metal to add a little glamour.

The staircase up to the second floor has risers with colorful mosaics of broken scrap tile and De Wolf’s childhood marble collection, as well as an artfully welded scrap metal balustrade. Upstairs, in the master bathroom, a wall of shallow cabinets is faced with more sheet metal, some with the manufacturers code still stamped on it, providing an industrial contrast to the glossy marble floors. The master bedroom overlooks the living room below, so the entire ceiling is tiled in a herringbone pattern of renewable bamboo and Kirei board. The floor is composed of soft butter yellow recycled leather tiles from EcoDomo. When Ranchel first mentioned using the leather, her mother wondered if the material would mar easily and suggested that guests not walk on the new floor. But Ranchel rather encourages scuff marks—the more beat up, the better—and hopes the floor will one day achieve the patina of a vintage leather coat.

More recently, Ranchel and De Wolf had a shipping container crane-dropped into the backyard to provide an office space. The interior walls of the 200-square-foot space are paneled in wind-fallen hemlock and alder. As an added touch, they had the Arciform crew use a router to trace lines along the wood’s natural grain. To save valuable space, Ranchel suggested they install tray tables on the walls, an idea that came to her while on an airplane full of them. De Wolf attached vintage paintings to the undersides so that the tables become artwork when closed. A small bathroom is partitioned by two custom shelving units, of which the center unit revolves on an old carburetor. A nearby sink basin tops a salvaged tree stump.

Even the beloved deck would eventually need Ranchel’s attention. Its upkeep proved tiresome, and during a gathering with friends, she landed a pogo stick right through the rotted wood. In the past few months, she’s collected more than 50,000 pounds of scrap metal from a closed pulp mill in Albany, and the new deck design will creatively meld the metal with concrete and brick. As she and De Wolf planned the install, Ranchel also decided to lay the foundation for a tower to be built on the lot. It’s an idea that she and De Wolf joked about at first but which quickly engaged Ranchel’s imagination.

Now, she imagines expanding the tower to three stories that would include extra storage, a guest bedroom and a cozy penthouse suite for entertaining.