If you want to pick a peck of peaches, Valley View Orchard is a sweet spot. The trees are expansive, planted in wide rows, with thick trunks and twisted branches. Then there’s the view from the orchard’s 100-plus-year-old farmhouse, where rows of peach trees slope down to a vineyard. Ashland is nestled below and conifer-studded hills are in the distance. 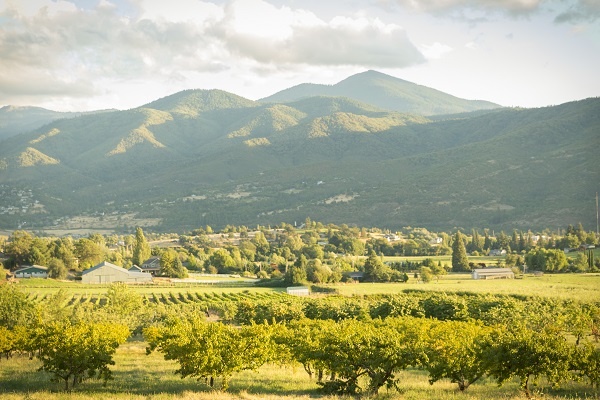 When Valley View Orchard was established in the late 1800s, it was much larger, and composed of mostly cherry and pear trees. The orchard has passed through many hands, including those of George and Barbara Eshoo, who planted new varieties and initiated a popular U-Pick operation. Along with peaches, the O’Learys grow pears, apples, cherries, apricots and nectarines—twenty-seven varieties in all. Their U-Pick customers account for a quarter to a third of the annual harvest.

Peach trees start producing fruit at age three, and have about five good productive years. The trick is to plant new ones in succession, so they start bearing fruit as the older ones slow down—a strategy similar to raising chickens, says O’Leary.

“There’s something about letting the tree produce the size it wants,” O’Leary says. The orchardists prune their trees selectively, but not aggressively—the latter practice yielding large but flavorless fruit.

Neither O’Leary nor her husband were orchardists by trade. He still practices law, but she left a career as an industrial engineer to focus on farming.

“I love that I can spend one minute talking about the life-cycle of a pest with an entomologist, and then the next pulling the engine out of some piece of equipment,” she says.

When they bought the orchard, they set a goal of transitioning it from conventional to organic, but first they had to get a handle on the deer problem. Previous owners sponsored hunts on the property, to no avail. The O’Learys decided on an exclusive approach, a perimeter game-fence that protects all fifty acres.

Even with the deer issue conquered, farming can be both satisfying and disillusioning. “There are so many things you can’t control, says O’Leary. “All you can do is be open to the fact that there are so many variables.” Bugs. Weeds. Weather. The previous owners had begun experimenting with a more natural approach. Insects were literally having a field day. So much so that in 2000, they lost almost the whole crop. She credits Oregon State University Extension Service entomologist Rick Hilton for helping them identify and combat pests, and believes the diversity of tree species helped prevent a major infestation of one kind of pest. Today, crop loss is less than five percent.

Going organic also meant controlling weeds and grass, especially around newly-planted trees, without chemical sprays. After years of hand-weeding, they are buying a mechanical tiller that attaches to their tractor.

Then there’s the wild card of weather. The critical period—after flowering and once the fruit sets—hinges on the last frost of the season.

“It can come quite late and be quite devastating,” says O’Leary. Frost can cause scarring, which halts fruit development. Fortunately, Valley View’s elevation at 1,900 feet safeguards it from the freezing fog that often settles in the valley floor below. Air flowing down from the hills above helps, too.

Peaches grow well in Southern Oregon, and farther north in the Willamette Valley.

“Oregon peaches are the best,” says Bruce Pokarny, communications director for the Oregon Department of Agriculture. “But as far as a commodity, they’re pretty far down on the list.” Part of that speaks to the state’s agricultural diversity. Oregon has more than 225 commodity crops. In the past ten years, annual peach production has averaged just more than eight million pounds. In 2012, the latest available data, that translated to a production value of $3.7 million.

Because it’s such a soft fruit, most of the harvest stays in the state and ends up in local markets. During picking season, the orchard also hosts a telephone “fruit hotline” and sends weekly emails to about 1,500 families on their mailing list.

The O’Learys are content keeping their production relatively small, with two full-time employees, plus seasonal hires. They also have to be pragmatic. Early on, they put in a vineyard, recognizing the high-value crop could help pay for their operation. Now, as many of the older trees near the end of their lives, the O’Learys face choices—plant trendy new varieties or heirlooms, seek higher yields of peaches or cultivate the old-fashioned charm of orchards of yore.

Four freestone peach varieties—red haven, forty-niner, sweet Sue and Elberta—grow on about six of the Valley View’s fifty acres. When pressed, O’Leary says red haven is her favorite, but mostly because it’s the first to ripen.

“There’s something perfect about that first peach,” she says. “You can’t help but have a smile on your face when you’re experiencing it.”