One of my favorite things to eat is a ripe Bartlett pear—so ripe that I can barely hold it. So ripe that when I bite into it, I barely feel the skin yield to my teeth and the juice runs down my chin. So ripe that the flavor resembles a sweet perfume.

This ritual is not something that you can do in front of anyone. The mess it makes is amazing, leaving your face and shirt fibers sticky. I highly recommend it.

A few years back, our neighbors announced that they were moving their family to Parkdale. “We’re taking over my family’s pear farm,” Dave said, grinning oddly. I said, “Wow, I didn’t know you grew up on a pear farm.” He laughed. “I didn’t,” he said. A family friend had been running it for years and was ready to hand it back.

“I know nothing about pear farming,” he confessed and chuckled. He was nervous. Moving day came, and I helped them load the truck. We were sad to see good neighbors go but wished them well. Later that year in the fall, I came home from work to find a crate of Bartlett pears on our doorstep with a note from Dave: “How’d we do?”

Before taking them inside, I opened the box and grabbed a ripened pear and bit into it. “Perfect,” I said as sweet juice ran down my chin.

Another great way to consume Oregon pears is to drink them. Portland’s Clear Creek Distillery creates Pear-in-the-Bottle eau de vie the European way, placing bottles over tiny pears still on the trees in May. The pears grow and ripen inside the bottle for a gastronomic ship-in-a-bottle effect. In August, the pears (and bottles) are carefully picked, cleaned and topped off with eau de vie. One sip of this delicious brandy and you’ll know why it’s called the water of life. 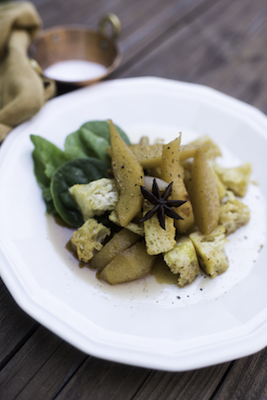 1 cup salad greens such as arugula or kale, or both

Preheat the oven to 350 degrees F. In a 10-inch square baking dish, arrange the pears side by side and drizzle with lemon juice. Set aside.

In a small saucepan set over medium heat, combine the wine, vinegar, shallot, sugar, vanilla-bean seeds and pod, star anise and salt. Heat until the sugar dissolves, stirring occasionally, then pour the mixture over the pears. Place in the oven and bake, basting occasionally, until the pears are tender, about 15 minutes. Remove pears from the juice and set aside. Place the juice back into the saucepan. Place the saucepan over medium heat on the stove and reduce the poaching liquid by a third.

Place bread in a medium mixing bowl. Drizzle the olive oil over the bread cubes and toss well. Spread the bread on a sheet pan in a single layer. Place in the oven and bake until bread begins to brown, about 10 to 15 minutes. Remove from the oven and set aside to cool

To serve, toss the warm bread chunks, greens, pears and a few spoons full of the pear sauce together in a large bowl. Divide among four plates, finish with fresh ground black pepper, and serve immediately.