Chef Gregory Gourdet takes his healthy lifestyle to the next level

Gregory Gourdet doesn’t have his own cooking show on television, but he’s as close to a celebrity as a chef can get. In the past four years, the 41-year-old, who lives and works in Portland, has been on the “best of” chef radar for the Northwest food scene. His innovative use of local ingredients at Departure, where he is the executive chef, has earned him accolades including “Chef of the Year” from the Oregon Department of Agriculture in 2013 and Eater Portland in 2014. The James Beard Foundation named him a semifinalist for Best Chef: Northwest and he took runner-up on season twelve of Bravo’s hit series Top Chef in 2015.

Originally from Brooklyn, New York, Gourdet moved to Portland in 2008 and made a monumental shift in his way of life. He openly discusses his struggles with addiction which in the past kept him up for days at a time searching for his next high. Now, he channels those urges into creating the healthiest version of himself possible. “It felt very empowering to be living my life free of drugs and alcohol,” Gourdet said. “I wanted all other aspects of my life to reflect that feeling.” 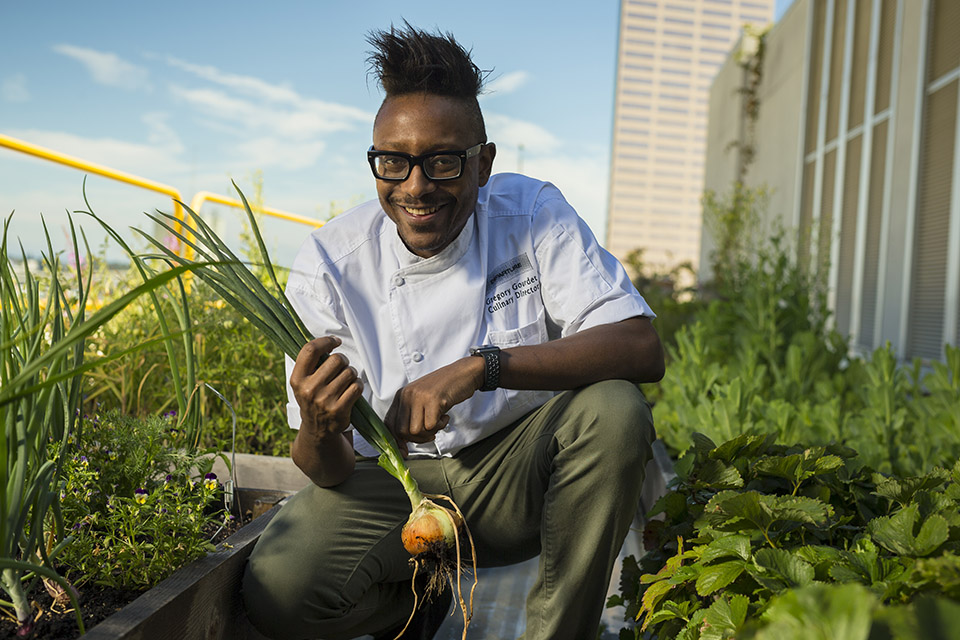 Gourdet is a long-distance trail runner. He regularly runs 18 miles in the Columbia Gorge before a thirteen-hour shift at Departure, which serves modern Asian cuisine. An admitted workaholic, it’s not easy for Gourdet to find time to exercise, but he carves out space because it fuels him physically and mentally. The time he spends running on trails translates into creativity in the kitchen. “I’m very much inspired by nature, the changing of the seasons and the solitude found in the quiet, grand woods, forests, mountain tops and beaches of Oregon,” Gourdet said. What he puts in his body counters the impact of being almost obsessively active. “If I go for a long run I know I need lots of protein to rebuild torn leg muscles. If I go to hot yoga, I know I need lots of water and juices to rehydrate and revitalize,” Gourdet said.

He describes himself as an extreme label reader who eats only whole foods—meaning nothing processed, filled with additives or preservatives makes it onto his plate. “Professionally I taste everything I cook, but my personal diet is based on lean proteins such as birds and fish as well as nuts, seeds, fruits and vegetables,” he said.

Gourdet has played a key role in Portland’s food boom. He’s helped open restaurants, been an executive chef and most recently, opened a second Departure location in Denver, Colorado. To call him a busy guy would be a massive understatement. “You know, I’m tired from life,” Gourdet said, “but every time I go to a doctor, my scores are great: my cholesterol is great, my blood pressure is great, so that’s amazing.”