Strong, malty, and possibly pie-spiced beers are known as “winter warmers” but when they’re served cold, while wintry, how bone-warming are they? Stroll through European Christmas markets from Germany to Belgium and you’ll come across stalls that serve glühwein (better known as mulled wine) or mulled cider. What’s more, sometimes you can enjoy a piping hot mug of glühbier. One Belgian brewer even releases a spiced version of their Kriek—a sour cherry lambic ale—to commemorate the holidays. But it’s an old world tradition that has never taken root in modern day America. 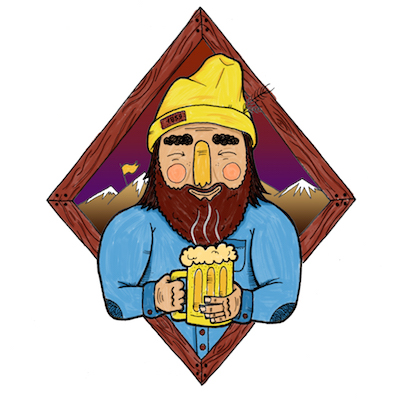 Portland’s Cascade Brewing was the first Oregon brewery to take this idea of adding mulling spices to beer and serving it warm. In fact, their Glueh Kriek—a spiced version of their already fantastic sour cherry beer—is how some Portlanders mark the beginning of the holiday season. Cascade’s lead blender Kevin Martin explained, “We serve ours hot by running it through a heat exchanger between the keg and the tap, then we garnish it with an orange slice with cloves.”

Another Portland brewery, Breakside, created a rye wine last year (don’t let the name fool you, it’s still beer in the vein of barley wine) designed to have mulling spices added and blended into a warm, warming cocktail. “I’m a big glühwein and glühbier fan,” said Breakside’s brewmaster Ben Edmunds. He noted that last year’s rye wine was then laid to rest in brandy barrels and released this year.

In Baker City, Barley Brown’s always has a beer made with some sort of chili peppers on tap. Hot Blonde—their light, golden ale with fresh jalapeños—is a summer classic, and now their cold-season counterpart, Cerveza Negra Caliente, is billed as a “winter jalapeño ale.” And while other winter warmers get their warmth from their high alcohol contents, this “hot black beer” (with hints of chocolate and spice) is only 5.5 percent ABV, achieveing its warming effect through the peppers. All these beers and more will be available, served warm, on December 18 at Bazi Bierbrasserie in Southeast Portland. Actually, Breakside’s offering will be their new seasonal Smoked Apple Ale. Bazi will host a night of Belgian and Oregon gluühbiers that are perfect for welcoming Weihnachtsmann, Pere Noel, or good ol’ Santa Claus.

*Note: 1859 beer writer Brian Yaeger is involved in the planning of the December 18 event.