Alesong Brewing & Blending’s gold medal for its Touch of Brett at last year’s Great American Beer Festival was well-deserved, if not a bit ironic.

The Eugene-based brewery, which opened at the end of 2015, was founded with the virtues of patience in mind, a nod to the time-consuming process it takes to create the barrel-aged and farmhouse-style beers the brewery has dedicated itself to.

And yet, less than a year after it opened – with just the fourth beer the brewery ever produced – Alesong took top honors in the Brett category at the most prestigious craft brew festival in the country.

So much for easing into things.

“Yeah, that was crazy,” laughed Matt Van Wyk, who founded Alesong with brothers Brian and Doug Coombs. “We’d been open for about six months. It was pretty surreal.”

Focusing almost exclusively on small batches of oak-aged and Belgian-inspired brews, Alesong has been racking up the accolades since it first began producing beer in early 2016. Beer Advocate named Alesong one of the top thirty-four new breweries in the country last January; the brewery’s Shake Your Tree, a sour made with peaches, won a gold at the Best of Craft Beer Awards in Bend in February; and Willamette Week honored Alesong as the best new Oregon brewery of 2016.

With an uber-competitive beer market, Alesong has stood out among the crowd with its blending and barrel-aging techniques. The brewery typically releases four beers every quarter, made with seasonal ingredients. For example, its spring release included Strawberry Symphony, a Gose-style ale made with sea salt and local strawberries, and Plum in Love, a wild golden ale aged in French oak barrels with plums. Last winter, the brewery produced Mocha Rhino Suit, an imperial milk stout aged in bourbon barrels with coffee and cocoa. And yes, it was heavenly.

Alesong is proudly not an IPA hop-bomb factory like so many other Pacific Northwest breweries. 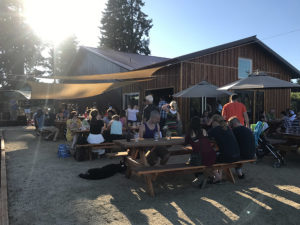 “We want to make the bottle of beer you bring to complement a nice meal or take home for Thanksgiving,” Doug Coombs said. “We’re excited that the guy really into craft beer is buying our stuff, but also that we’re a brewery making beer that appeals to wine drinkers and other people who never thought they liked beer before.”

The brewery has thrived in large part because of the different strengths of all three partners, Brian Coombs saids. Van Wyk came to Alesong with more than fifteen years’ experience as a brewer, including six as the head brewmaster at Oakshire. Doug Coombs joined Alesong with a wine and business background. And Brian Coombs, a trained chemist who brought the whole gang together based on his love of barrel aging and blending, had spent time working on Oakshire’s barrel-aged beer program, where he first worked with Van Wyk, and at King Estate Winery.

“We each bring a different skill set to the company,” Van Wyk said.

To further differentiate themselves from the industrial warehouse brewpub look of so many of their competitors, Alesong recently opened up a tasting room 20 miles southwest of Eugene in the foothills of the Willamette Valley.

“Slow down and relax,” Van Wyk said. “That’s what our beer’s all about. And that’s why we decided to put our tasting room out in the country in the beautiful Willamette Valley. Come out to the tasting room and don’t be so tied into the rat race.”

Web: Alesongbrewing.com
There are a hundred more ways to have fun in Eugene in the fall.