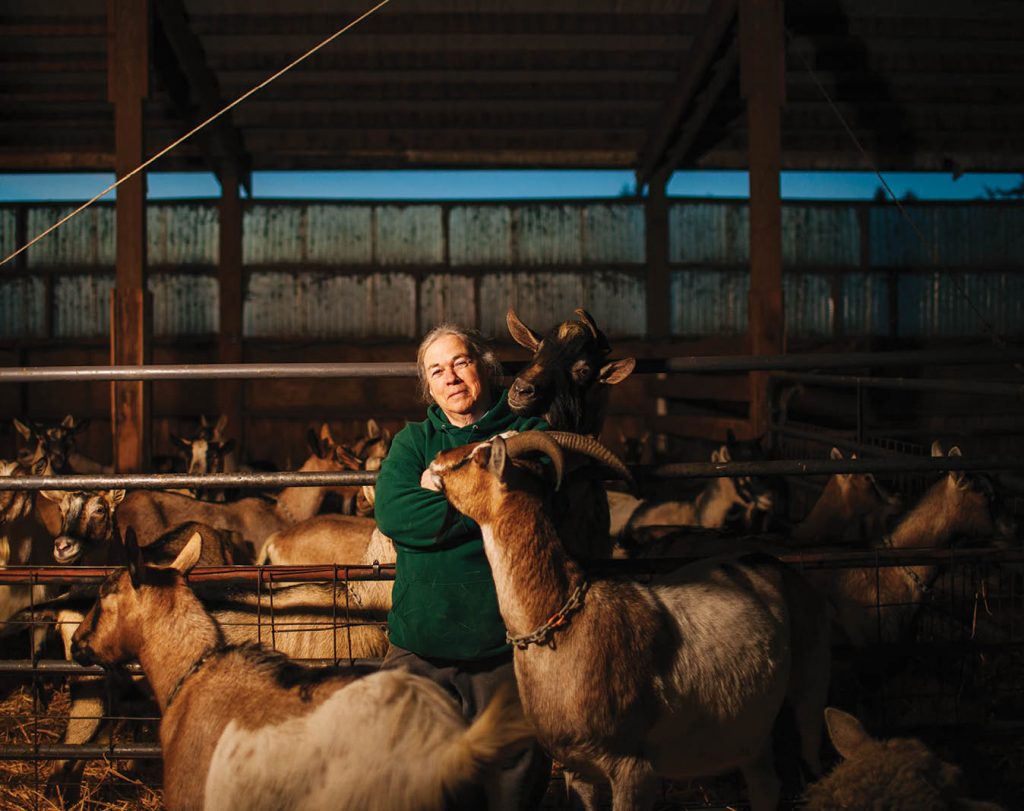 Does anything epitomize spring more than baby goats frolicking in a farmer’s emerald green field? This has been a familiar view for Patricia Morford with Rivers Edge Chèvre since 1958, when her father brought home the family’s first goats. Jack, Stripes and Pinky had a specific job—eating the blackberries that had overrun an apple orchard. They stayed with the family long after the vines were gone, however, and ended up being the inspiration for Morford’s career as a farmstead cheesemaker. 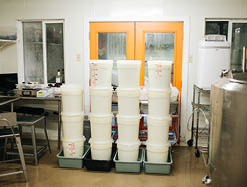 Long before she wrapped her first log of chèvre, Morford was known for her outstanding goat breeding program. “I just kind of fell into making cheese because I had such good milk genetics and I was interested in producing food,” she said. She started making cheese for her family around 1970. By 1990, she had decided to expand her cheesemaking operation so she could share her flavorful products with others.

With no startup capital flowing in, however, that dream took a long time to become a reality. “We started stockpiling anything giant and stainless we could find,” she said. She built a European-style creamery on her property in Logsden, about 20 miles inland from Newport, with a cheesemaking room on the first floor and a residence on the second story. And she learned everything she could about the process of transforming goat milk into something entirely different. “There’s the science of making cheese and the magic of making cheese,” she said. “The science part and I don’t usually get along very well, but I can make really good cheese. It’s almost like I’m an alchemist instead of a chemist.”

“There’s the science of making cheese and the magic of making cheese. The science part and I don’t usually get along very well, but I can make really good cheese. It’s almost like I’m an alchemist instead of a chemist.”

It was 2005 before she was producing enough to think about wholesaling. “New Seasons was our very first customer,” she said. “I just stumbled in with a bunch of cheese and said, ‘Here, try this.’” The grocery chain has been one of Morford’s main customers ever since. Her products are also available at several other independent stores and farmers markets.

Rivers Edge is one of few completely farmstead-made cheeses in Oregon, and each piece’s flavor is deeply linked to where it was made. Morford forages ferns from her property for wheels of Siltcoos, a bloomy rind cheese. Up in Smoke, a smoked chèvre that’s misted with bourbon, is wrapped in big-leaf and vine maple leaves she’s plucked from her trees. Other cheeses have names that are unique to the coast, including Yaquina Bay Pavé (a bloomy rind cheese with green peppercorns), Cape Foulweather (an ash-coated pyramid) and Humbug Mountain (a truncated pyramid).

When people learn what Morford does, they’re often entranced by the idea of keeping livestock and making cheese. But the lifestyle isn’t as romantic as it sounds. She and her daughter Astraea, who helps run the business, begin every day working with the animals. The farm has 120 Alpine and Golden Guernsey goats, about seventy to a hundred of which are producing at any given time. They must be milked every morning. After that, there’s equipment to clean and animals to feed and nurture. The afternoon is dedicated to “cheese stuff”—pasteurizing and culturing the milk, dipping curds into forms or cheesecloth bags, packaging and shipping the finished products, and many other tasks.

This daily ritual repeats itself seven days a week. Morford estimates they work twelve to fourteen hours every day. It’s a punishing schedule, but one that’s entirely worth it to her. “This has been my passion for almost my entire life, so I get to do what I want to do. It’s fairly flexible at the farm, so we can work in things like spending time in the garden. It’s actually quite a nice lifestyle if you don’t mind the work.”

Crafting goat cheese remains a relatively small industry in Oregon. According to Katie Bray, executive director of the Oregon Cheese Guild, nine of the organization’s twenty-three members produce goat cheese. “All of them are on the smaller side—that is, they make less than 37,500 pounds of cheese a year,” she said. Producers are clustered in western Oregon and stretch from the Portland area to Southern Oregon’s Applegate Valley.

At mealtime, incorporate goat cheese into a first course with goat cheese panna cotta from Tina’s Restaurant in Dundee. Chef Briana Olvera serves it with a crudité platter of fresh and seasonal foods that may include grilled vegetables, watermelon radishes, berries, melon and figs.

Goat cheese ravioli is a signature dish at Carina Lounge in Portland. According to owner Peter Kost, the recipe was originally created by chef Mark Fuller in 1998 for Kost’s first restaurant. He brought it back for his latest venture, and received so many requests for the recipe that he created this version for guests to take home.

For dessert, wrap goat cheese in papery crêpes to make goat cheese blintzes from Lisa Horness, pastry chef at Paley’s Place in Portland. Topped with chamomile-scented poached pears and candied walnuts, they bring earthy and sweet flavors together in an unforgettable way.

Out on the Oregon (Tasting) Trail