My geocaching trial is off to an inauspicious start. After circling the block of my Bend neighborhood watching the virtual compass on my Android phone bounce from north to west and back to north, and finding myself no closer to the invisible X that marks the spot, I’m now blindly following the directions from my smartphone.

I’ve spent three hours recently with a group of the Northwest’s most prolific geocachers on an organized treasure hunt that more closely re- sembled a scene from the Amazing Race than a stroll through the woods, but I’m still a geocaching neophyte. Without my expert companions who checked off one find after another during that outing, I’m lost in my own neighborhood.

I’m looking for a cache called The Bridge that was hidden by a geocache enthusiast who goes by the handle, “flyingsquirrel1.” For the uninitiated, a cache is usually a small container or some recognizable object that serves as the prize of the geocaching hunt. It’s typically a small waterproof vessel such as an old film canister or plastic prescription bottle that contains a few trinkets and a modest logbook, usually just a scrap of paper that allows “cachers” to scratch down their name, or more commonly their geocache handle and the date. The activity, which was born a little more than a de- cade ago in Oregon, has exploded in popularity in the past several years, thanks in part to the proliferation of GPS-enabled smartphones. While it shares aspects of activities such as orienteering, geocaching is premised entirely on the use of GPS technology to help cache hunters hone in on the precise location of the cache. After that, it becomes hunt and peck, usually involving the lifting and replacing of rocks and sifting through various nooks, both natural and man-made. It’s essentially a treasure hunt where the treasure is the hunt itself.

Depending on how you measure it, geocaching might just be one of the fastest growing outdoor activities on the planet. According to various sourc- es, there are roughly two million geocaches hidden worldwide. (By way of contrast, there are only about 34,000 McDonald’s restaurants worldwide.) While there are no firm numbers on participation, due to the decentralized nature of geocaching, the number of people actively engaged or at least dab- bling appears to be growing rapidly thanks to the proliferation of Apple- and Android-powered phones. These devices allow newbies like me to connect with the hidden world of geocaching. To wit, more than one million users have downloaded geocaching.com’s c:geo app. 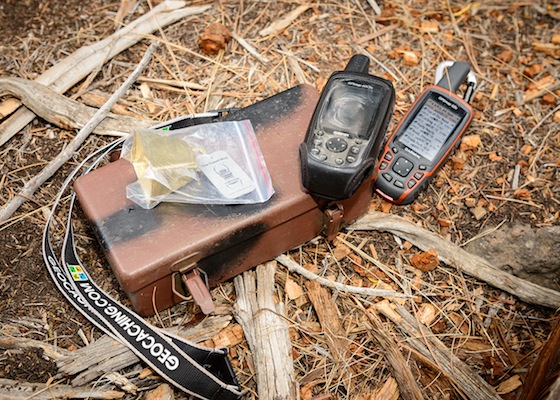 It doesn’t hurt that kids love it, making it a great family activity. Several participants in the recent Bend Cache Machine brought wives and chil- dren. Paul Seideman has four kids. A probate officer who spends his days parsing family estates and rancor that comes along with it, Seideman says geocaching is respite. It’s an excuse to get outside and explore. Seideman gravitates to caches that have some geological or historical significance. In that respect geocaching has become a mobile classroom for his family.

“The fun ones are where you get to see something cool or learn something interesting,” says Seideman.

For my own geocache, I’ll take any help I can get. I click on a tab on the app and learn that the cache is hidden on a nearby bridge, as I originally sus- pected. Turns out I didn’t need a satellite, just a hint. Within a few minutes, I’m lifting rocks and scanning the concrete bridge footings for the cache. Wearing my faded and stained hooded sweatshirt and riding my wife’s slightly too small bike, I’m especially aware of the passersby, as they are me. In this environment, I must appear to be more vagrant than “investigative” journalist. But I press on.

I search the two far corners of the bridge before honing in on the south- west corner where the local parks department has converted a stretch of the gravel canal road into a local pedestrian trail. I lift more rocks, ruffle through the grass and weeds and probe some waist-high decorative firs before zero- ing in on the guardrail where the curved steel edges seem to beckon for a cache. Moments later, I see a small duct tape-wrapped container wedged between the wood post and the steel rail. Jackpot! Inside is a single white golf tee, a small rock that’s been painted gold along with a scrap of paper and a nub of a pencil. I replace the canister and make a mental note that I have officially logged my first geocache.

For more information about the Eugene, Cascades & Coast GeoTour check out: