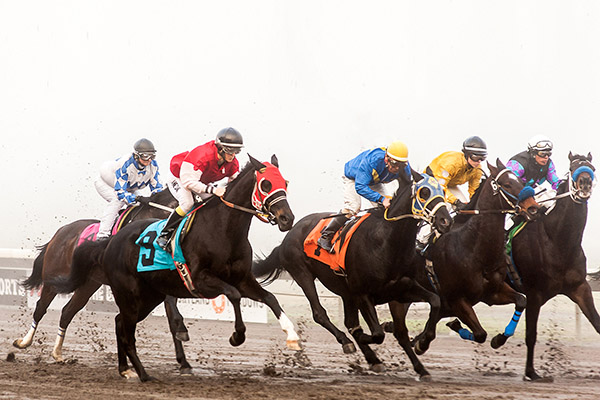 What motivated you to get into horse racing?

I think what motivated me to get into horse racing as an actual participant rather than as just a fan was a desire to make a living riding horses. I had been riding since I was 5, but I didn’t really have the ability or even desire to be a top show jumping rider or a professional horse trainer in the hunterjumper world. I realized that my personality and physical size were much better suited to racing.

How old were you when you started racing?

Your family doesn’t fit the typical profile. Tell us how they played a role in your early riding years.

Though my parents were not horse people, they were open to whatever I might be interested in. I don’t know why I was horse obsessed at 5 years old … I doubt they did either. They decided to get me riding lessons, and my mother actually took lessons with me. Wednesday was her day off, so that was always our day to be together. We ended up riding together in the same lesson every Wednesday until I graduated high school. Both of my parents have always been very supportive of all of my horse endeavors (and they spent a huge amount of money on my horses and shows and all that … so thanks Mom and Dad). They are both very passionate about their careers, and I think they wanted me to do something that I was passionate about also.

Tell us about the first time you won at Portland Meadows?

The first race I won at Portland was with a horse called Hold the Gold. I arrived in Portland having won only one race, and I went there on the recommendation of Dennis Ward, my trainer at the time. Dennis had set me up with an agent, and this particular agent was a very good one. Good agents are like good used car salesmen, and as a jockey, it’s not a bad thing to have an agent with a few dirty tricks up his sleeve. My win on Hold the Gold was the product of one such dirty trick. The trainer of the horse, Len Kazmerski, had wanted my agent’s other jockey to ride the horse. At the draw, however, my agent switched riders on Kazmerski’s horse and put me on instead (without telling him, of course). When the entries came out, Kazmerski was understandably furious, but my agent was certain that this particular filly would win, and he wanted me to get my first win at Portland right away so that I could start building my business and show everyone that I could ride. Luckily, the horse did in fact win, and I ended up riding a bunch of other horses for that same trainer after that. As a side note, I did not actually know about any of this until quite a bit later after I had won on multiple horses for that trainer.