IN May of 2013, food inspectors found GMO wheat from Oregon in a shipment to Japan and Korea, countries that strictly forbid genetically modified organisms. This fueled a broader debate and legislation surrounding GMO labeling and modified crop-growing in Oregon. We caught up with Scott Dahlman (Oregonians for Food & Shelter) and Scott Bates (GMO Free Oregon) to frame the debate for us.

written by Megan Oliver | featured photo by Talia Galvin My wife and I moved our family here in 1989. I spent years cyclo-commuting between my home on the edge of Oregon City and Lake Oswego before we moved our investment management firm to Oregon City in 2008. Cycling has endured as my passion. In my spare time, I’ve led bike tours and generally enjoyed the rudimentary, yet plentiful recreational biking opportunities available to my kids. A few years ago, I attended a cycle tourism studio in Clackamas County. Someone mentioned that there was no high-end bike shop nearby. I looked into it, and there was no shop in south Clackamas County, a geographical radius of 70,000 residents. The cogs started turning, and I ended up showing a five-page business plan for an Oregon City cycle shop to local developer Dan Fowler. When cycling’s Specialized offered me a dealership, I…

REGON HAS A LONG AND ILLUSTRIOUS HISTORY IN THE SHOEMAKING INDUSTRY. Home of the footwear giant Nike, the state is also the site of the world’s oldest known shoes, 10,000-year-old sagebrush bark sandals discovered in a cave near Fort Rock, east of Gilchrist.

LONG BEFORE CRANBERRY JUICE became a staple on supermarket shelves, cranberry farming was a part-time job that Oregon Coast families took up to supplement their incomes.

WHEN HAL SCHUDEL, 95, was growing up in the tiny town of North Loup, Nebraska, he and his family were never without a Christmas tree around the holidays. 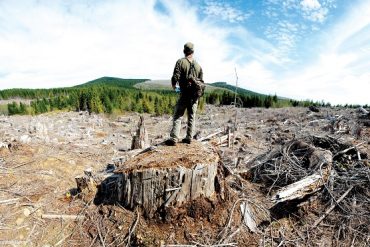 Sound Off: Opening New Logging Areas
In September, Rep. Peter DeFazio, the ranking member of the U.S. House Natural Resources Committee, saw the passage of the Oregon & California Trust Act. This bill effectively opens federally managed O&C Trust lands in the Cascades andCoastalRangefor logging of up to 500 million board-feet per year, compared with 200 million board-feet annually harvested over the past few years through BLM-managedOregonforests. The bill also establishes 90,000 acres of new wilderness, 130 miles of new Wild and Scenic river designations, and provides protection for more than 1.2 million acres of mature and old growth forests. The logging proceeds would generate an estimated $90 million forOregoncounties that are facing the long-anticipated cut of federal logging subsidies known as the Secure Rural Schools legislation. Proponents of the bill cite its continued federal funding and job creation. Opponents of the bill see it as a repeal of the Northwest Forest Plan, which aims for lower forest production and conservation. Here, Rep. DeFazio and Wild Oregon’s director, Sean Stevens debate the merits of the bill.

Across the state, a collection of paradigm-shifting entrepreneurs is bucking the system. By turning their backs on the notion that the music industry revolves around metropolitan destinations such as Los Angeles, New York, and London, these ambitious music-lovers are bringing fans exactly what they want. By staying local, Oregon record labels are creating a culture and community that not only houses hometown musicians, but also puts our region on the map as a destination for those seeking cutting-edge musical experiences.

We caught up with Livelybrooks in Astoria, aboard the Navy-Woods Hole research vessel, Atlantis. He had just returned from helping recover thirty seismometers—each about half the size of a compact car—from the underwater fault line between the Juan de Fuca and North American plates.

To emphasize that point, in 2012, Professor Todd Humphreys from the University of Texas at Austin was allowed to set up on a hill a half mile from the White Sands Missile Range in New Mexico. He and his team of students on that hill, hijacked an $80,000 drone that the Department of Homeland Security was testing for law enforcement purposes. The academics easily stole command and sent the drone hurtling toward the ground. This drone, it should be noted, had the same security that is standard for commercial UAVs.