Until Barbara Steele started  Cowhorn Vineyards with her husband less than a decade ago, she wasn’t much different from the average wine consumer—“For a special occasion we’d buy a $20 bottle instead of a $10 bottle”—until she got into the business and realized she didn’t really know how to make a $50 bottle of wine.

But the founders enlisted top talent, stayed patient, and Cowhorn developed to deliver some of the best syrah in Oregon.

Steele started the farm in 2003 and spent several years getting the property ready—building roads, adding irrigation—before her husband, Bill Steele, came to work the land in 2005. The winery opened in 2008.

“Biodynamic method is a farming method, but it’s also a lifestyle and a philosophy,” Steele said. “I use a phrase that’s often used in the corporate world, the 360 review. … I look at my life and the farm from that point of view—will it be good for the community? For the soil? For the crossflow of critters? Will it be good for customers and the wine club? That’s a really biodynamic way of looking at it. We look at our farm as though it’s an organism, like a whole body.”

One of the keys to making the winery as ecofriendly as it is? The buildings. After living in an old farmhouse and working out of the building, the Steeles built a home for themselves following passive house design. They put the farmhouse on a proper foundation, and it’s still used as a shop—“It’s our welding shop, it’s where our worm bins are, it’s where everything happens.” Then they built the winery building in 2006. Steele believes the building could earn a LEED silver standard certification.

“We also want our people to be in a good environment,” she said.

Now the Steeles are in the process of getting the new tasting room certified through the Living Building Challenge. If it’s approved, it will be the only tasting room in the world to achieve that ambitious standard. 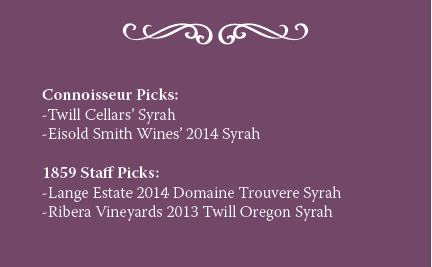 “We’re definitely a mission-driven business,” Steele said. “We really want to show people that there are models of farming that are good for the environment and do work economically. That’s what gets us up every day.”

Plus, she said, the land is “a little magical.” The Steeles enlisted experienced consultants and a soil scientist to help with the wine. “They saw the magic here to make cool-climate wines, to make Rhone wines that are so misunderstood.”

Rhone-style syrahs fall into a few categories—from California’s hot climate to European Rhone Valley wines to Shiraz in the Southern Hemisphere. Then there’s the cooler-climate wines such as Cowhorn’s.

“When you pair biodynamic agriculture with cooler climates, you’re drawing out this nuance,” Steele said. “We’re all about creating wines of nuance, and you get something pretty powerful when you put a cool climate and biodynamic farming together.”

Steele said Cowhorn’s syrahs are similar to northern Rhone Valley wines. “We’re definitely fruit first. We don’t want to make something that is high alcohol or with a high oak finish,” she said. “We are an Oregon winery, and we have an Oregon palate. You enjoy that element of fruit first but at the same time there’s the baking spice and violet and aromatics.”

What’s next? Steele said her team is still getting used to working in a living building. After that’s sorted, the sky is the limit.