Overshadowed by the pinot noirs that put Oregon on the wine map, riesling was one of the pioneering varietals planted in the state alongside pinot noir, as far back as the 1880s. The city of Elkton in the lower Umpqua Valley has the ideal climate for the aromatic riesling.

Brandborg has been producing riesling since day one, in 1986 to be exact, in his garage. The winery now sources its grapes from the nearby Bradley Vineyards and Anindor Vineyards, both of which use cuttings from Elkton’s original planting of riesling in 1972.

Today, this winery’s riesling is regarded highly among sommeliers in Oregon. “The Alsatian-style whites coming from this high elevation vineyard in Umpqua stand up any day to their European counterparts,” said Lauren Smith, wine director and owner of Corkscrew Wine Bar. 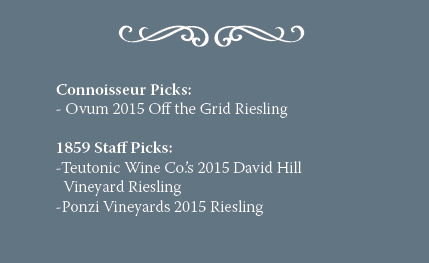 According to Brandborg, riesling has always been one of his favorite wines because of its versatility and transparency. “Rieslings reflect a sense of place and where they’re grown,” he said. Because Oregon has various microclimates, every riesling in the state reflects its own region.

Brandborg’s 2011 and 2012 Oregon rieslings are set apart from others by their gentle balance of searing acidity and residual sugar—the backdrop for floral honeysuckle notes, citrus, orange blossom and lemon blossom.

“I’ve often said if I had to pick to one white wine to take with me to a deserted island, it would be a riesling,” Brandborg added. Riesling, he noted, pairs well with most anything, from sushi to veal, to charcuteries, fruits and cheeses—best served chilled as a summer sipping wine.

According to the Oregon Wine Board, riesling accounts for 2.6 percent of the grapes grown in Oregon. While Germany and France are the largest and oldest producers of this floral, acidic wine, Oregon is an up-and-coming region for the varietal, ranking only behind Washington and California for production in the United States. Though it hasn’t sold as well as either of the pinots in Oregon so far, we expect to see more of this pioneering grape in the future.